Katwijk is a coastal municipality and town in the province of South Holland, which is situated in the mid-western part of the Netherlands.

The Oude Rijn ("Old Rhine") river flows through the town and into the North Sea.

Katwijk is located on the North Sea, northwest of Leiden and 16 km north of The Hague. It shares its borders with the municipalities of Noordwijk, Teylingen, Oegstgeest, Leiden, and Wassenaar.

In October 2018, Katwijk had a population of 65.220. Katwijk is by far the largest town in the Duin- en Bollenstreek ("Dune and Bulb Region"). 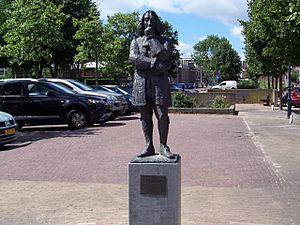 The name "Katwijk" probably has its origins in the name of a Germanic tribe called the Chatten (Chatti). The Dutch word "wijk" means "area", so the name probably meant something like "the Chatti area".

In Romans times, Katwijk was a place of strategic importance. It was located at the Roman Empire's northern border, at the mouth of the Rhine river, which in Roman times was larger in this area than it is today. There was a good deal of traffic along the Rhine. Katwijk was also a jumping-off point for the voyage to Britain.

During World War II, Katwijk aan Zee was heavily damaged. On 1 May 1942 beach access was no longer permitted and large scale evacuation took place. From October 1943 houses were demolished as part of the construction of the Atlantic Wall. 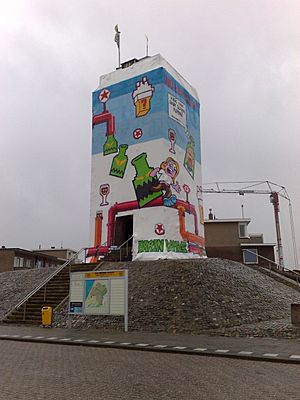 The town is very popular with tourists, especially those from Germany. Katwijk is a seaside resort with a wide sandy beach. Its attractiveness is mainly due to its laid-back atmosphere. The boulevard along the shore is not spoiled by large hotels or apartment blocks. Besides the beach, there are a few museums in Katwijk, like the old fisherman's museum Katwijks Museum and the Spinoza-museum.

A few kilometers inland is the Valkenburg Lake Steam Train, a narrow gauge railway museum where a scenic steam locomotive driven train ride can be taken around Lake Valkenburg. Katwijk has many hotels and three camping places, mostly situated in the dunes.

Near Katwijk are the headquarters of the European space organisation ESA with its space travel museum Space Expo.

Katwijk is known for its wide-spread graffiti culture. Several legal graffiti places can be found in the town. Graffiti-related activities are often organised, for example covering the local lighthouse with graffiti.

All content from Kiddle encyclopedia articles (including the article images and facts) can be freely used under Attribution-ShareAlike license, unless stated otherwise. Cite this article:
Katwijk Facts for Kids. Kiddle Encyclopedia.