The Bundesgerichtshof (Federal Court of Justice) (BGH) is the highest German court for civil and criminal law. It is one of the six Supreme Courts in Germany.

are the other supreme courts. They only hear cases about their areas of law. There is no appeal from any of the supreme courts, unless someone's human rights are affected which is a matter for the Bundesverfassungsgericht - the Federal Constitutional Court to decide. 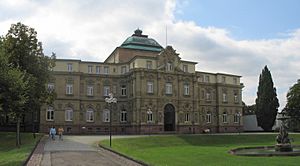 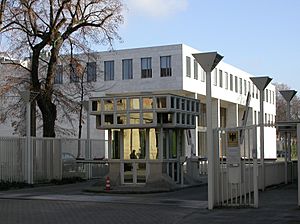 The Bundesgerichtshof was founded in 1950. Its headquarters were in the old Palace of the "Hereditary Grand Duke" (the heir apparent) of Hesse in Karlsruhe.

The 5th division used to meet in West Berlin so that appeal cases could be heard in the city without having to take criminals across the DDR. The Federal Administrative Court moved into the Villa sack as well on August 22nd, 2002.

The BGH is divided into "senates". Each Senate has a judges as chairman and four assessors.

Which senate hears a case depends on what is being argued about.

IV. Law of inheritance and insurance

VII. Planning and building laws and regulations and contracts

X. Patent and registered design law, "kind protection" (that is, protecting types of plants a breeder has grown),

Presidents of the Federal Court of Justice

All content from Kiddle encyclopedia articles (including the article images and facts) can be freely used under Attribution-ShareAlike license, unless stated otherwise. Cite this article:
Bundesgerichtshof Facts for Kids. Kiddle Encyclopedia.