Piper excelsum is found in both New Zealand and the Society Islands (Tahiti). 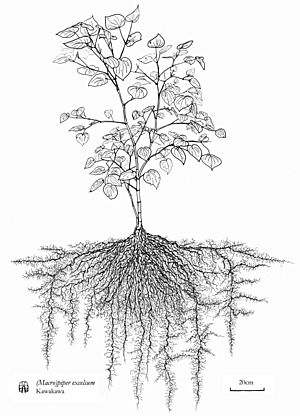 Kawakawa is found throughout the North Island, and as far south as Okarito (43.20 °S) on the West Coast, and Banks Peninsula (43.5 °S) on the east coast of the South Island. The leaves are often covered with holes caused by the caterpillar of the kawakawa looper moth (Cleora scriptaria). The images depict the variety majus which has larger and more glossy leaves than P. excelsum. The name kawakawa comes from the Māori language, where it refers to the bitter taste of the leaves, from kawa or bitter.

Kawakawa leaves are about 5–10 cm long by 6–12 cm wide; they are opposite to each other, broadly rounded with a short drawn-out tip and are heart-shaped at their bases. The leaves are deep green in colour if growing in the forest, but may be yellowish-green in more open situations.

The flowers are produced on greenish, erect spikes 2.5–7.5 cm long. Kawakawa flowers are quite minute and very closely placed around the spike. After pollination the flowers gradually swell and become fleshy to form small, berry-like fruits that are yellow to bright orange.

Each berry cluster is the size of a small finger. Ripening period is January and February. These fruits are favoured by kererū or New Zealand pigeon (Hemiphaga novaeseelandiae) and tui (Prosthemadera novaeseelandiae).

Kawakawa is a traditional medicinal plant of the Māori. An infusion is made from the leaves or roots, and used for bladder problems, boils, bruises, to relieve pain or toothache, or as a general tonic. The sweet edible yellow berries (most often found in summer on female trees) of the plant were eaten as a diuretic.

It also is important in cultural contexts: host people of a marae wave leaves of kawakawa to welcome guests. At a tangi, both hosts and guests may wear wreaths of kawakawa on the head as a sign of mourning.

It is commonly grown as an ornamental plant in gardens.

All content from Kiddle encyclopedia articles (including the article images and facts) can be freely used under Attribution-ShareAlike license, unless stated otherwise. Cite this article:
Piper excelsum Facts for Kids. Kiddle Encyclopedia.