Kids Encyclopedia Facts
(Redirected from Republic of the Marshall Islands) 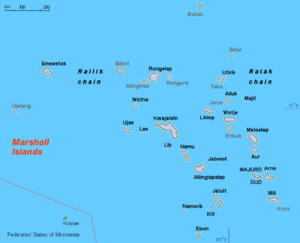 Map of the Marshall Islands

Roughly 10% of the population of the Marshall Islands can now be found in northwest Arkansas, U.S. Most live and work in the city of Springdale, a community of roughly 50,000. Each year, the Marshallese host a homecoming event so friends and relatives can get together to celebrate, stay in touch with politics at home, and spread their island culture. They meet at the Jones Center for Families in Springdale and have dancing, feasting, volleyball, and basketball. As a population, they are devoted to family and church and bring island dance and song to this corner of Arkansas.

All content from Kiddle encyclopedia articles (including the article images and facts) can be freely used under Attribution-ShareAlike license, unless stated otherwise. Cite this article:
Marshall Islands Facts for Kids. Kiddle Encyclopedia.