Tiana is a fictional character in Walt Disney Pictures' 49th animated feature film The Princess and the Frog (2009). Created by directors Ron Clements and John Musker and animated by Mark Henn, Tiana, as an adult, is voiced by Anika Noni Rose, while Elizabeth M. Dampier voices the character as a child.

Tiana is loosely based on two princesses: Princess Emma, the heroine of E. D. Baker's 2002 novel The Frog Princess, and the princess from the Brothers Grimm fairy tale "The Frog Prince", which inspired Baker's novel.

A hardworking waitress who dreams of opening her own restaurant, Tiana finds her progress stalled when she transforms into a frog after desperately kissing a prince who has been turned into one by an evil witch doctor. She is the ninth Disney Princess. Tiana made history as the first African American princess in the Disney Princess franchise.

Tiana has been mostly positively received with critics praising her personality and values. However, the depiction of Tiana and her community has been criticized for lacking "emphasis on racial issues". The decision to depict the two main characters, Tiana and Naveen, as frogs for the majority of the film has also caused controversy, with some saying that it downplays the characters' identities.

The Princess and the Frog

Main page: The Princess and the Frog 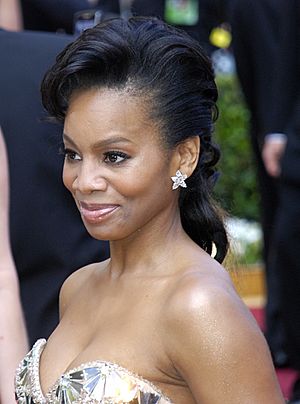 Anika Noni Rose voiced as Tiana in the film.

Tiana works two jobs in order to raise enough money to turn a rundown sugar mill into a restaurant, a promise she made to her now deceased father. As a result, Tiana has become absorbed with her work and doesn't have time for anything else. Tiana finds hope when her wealthy childhood best friend Charlotte pays her a lump sum of money to make and serve beignets at a masquerade ball she is hosting for the handsome but disinherited Prince Naveen.

That night, Tiana's hopes are crushed when the realtors of the mill tell her that she was outbid by someone for the sugar mill and that it is probably a good thing given her 'background'. When Tiana accidentally ruins her costume, Charlotte is kind enough to replace it with one of her own. Out of desperation, Tiana wishes on a star, only to be greeted by a talking frog, who claims to be Prince Naveen. Mistaking her for a princess because of her costume, Naveen promises to give Tiana the money she needs if she turns him human again by kissing him. After some persuasion, Tiana succumbs, but becomes a frog instead.

While on the run from hungry gators, Tiana strikes a deal with Naveen, demanding that once he marries Charlotte, he will use the money he gets from her to help Tiana buy the restaurant. Things change, however, on their journey to end the spell. They both meet a jazz-playing alligator named Louis and a Cajun firefly named Ray, who help them reach the voodoo priestess Mama Odie. Tiana and Naveen help each other escape from frog hunters and Tiana teaches Naveen to help her cook. As Ray sings an ode to his true love "Evangeline", Naveen shows Tiana how to dance, something that she has never done before because she was afraid to. Both frogs find themselves falling in love with one another, but are unsure how to say it.

Eventually Tiana comes face to face with Facilier himself, who promises to make her dream of "Tiana's Place" a reality if she hands over a voodoo charm which plays a significant role in his plans. After reminding her of all the work she has done and the people who held her back, he shows her an image of her late father, telling her that she can make sure the dream he never lived to see come true. Seeing her family together, Tiana finally realizes what her father had meant that he never got what he wanted but he had love, what he needed. Tiana is able to smash the charm and leaves Facilier at the mercy of the angry voodoo spirits.

Tiana finds Naveen, who is promising Charlotte that he will marry her but only if she will give Tiana her restaurant. Tiana stops him and finally admits that she loves him. Moved, Charlotte says she will kiss Naveen, "no marriage required", but it is already midnight and she is too late to break the spell. Tiana and Naveen get married in the bayou. Once they kiss, they finally become human again because Tiana is finally now a princess and is shown wearing her princess ball gown. Louis "terrifies" the realtors into accepting Tiana's offer. Together, Naveen and Tiana open the restaurant, now named "Tiana's Palace" and dance under the stars. Tiana's singing voice is also provided by Anika Noni Rose. 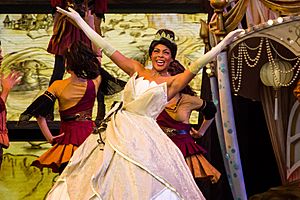 Tiana in Mickey and the Magical Map at Disneyland in 2014.

On October 26, 2009, "Tiana's Showboat Jubilee!" debuted with appearances from Tiana, Naveen, Louis, and Dr. Facilier, at the Walt Disney World Resort; and later at the Disneyland Resort. Tiana and Naveen are also in the "Festival of Fantasy Parade" at Walt Disney World's Magic Kingdom. Tiana and Naveen are also doing meet and greets at Walt Disney World's Liberty Square, and in other parks in the “Frontierland” area. She joined Disney's "Once upon a Dream Parade" at Disneyland Paris in April 2010 as part of the "New Generations Festival". Tiana also joined Fantasmic! in early January 2010 during the finale with the Mark Twain Riverboat. Tiana, along with Naveen, Doctor Facilier, and Ray each make a cameo appearance in Disney's World of Color at Disney California Adventure Park. Tiana and the other Disney Princesses have an attraction at the Magic Kingdom called Princess Fairytale Hall. In 2014, Tiana made a guest appearance on Sofia the First. When visiting Walt Disney World visitors originally spotted Princess Tiana under a shady, forest gazebo at the edge of Liberty Square. Since June 2016, Tiana has been doing meet-and-greets at Princess Fairytale Hall.

Tiana, alongside the other Disney Princesses, appeared in the film Ralph Breaks the Internet, as it was announced at the 2017 D23 Expo.

A live-action character inspired by Tiana is a main character in the seventh season of Once Upon a Time, and she is played by Mekia Cox. In the New Enchanted Forest Tiana is the Queen of her kingdom, but then everyone in the realm is cursed and taken to a Land Without Magic. A new area of Seattle called Hyperion Heights is created and everyone including Tiana are sent there with new memories. Her new counterpart Sabine was a fast-food chef, but is now a food truck owner who sells beignets. Eventually, the Dark Curse is broken and Sabine regains her memories. In the series finale, Tiana is seen attending Regina Mills' coronation as the Queen of the newly United Realms.

In December 2020, it was announced that Tiana would have a self-titled spin-off TV series debuting on Disney+ in 2022.

All content from Kiddle encyclopedia articles (including the article images and facts) can be freely used under Attribution-ShareAlike license, unless stated otherwise. Cite this article:
Tiana (Disney character) Facts for Kids. Kiddle Encyclopedia.