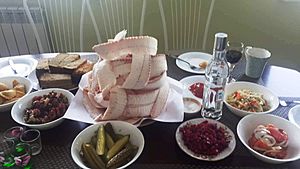 Prepared stroganina on a table 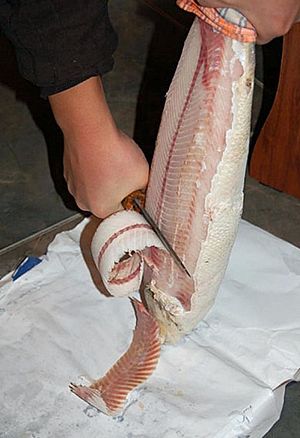 Stroganina (Russian строганина, literally "shavings") is a dish of the indigenous people of northern Arctic Siberia consisting of raw, thin, long-sliced frozen fish. Around Lake Baikal, the dish is referred to as raskolotka. Traditional stroganina is made with freshwater whitefish salmonids found in the Siberian Arctic waters such as nelma, muksun, chir, and omul. Rarely, it is made with sturgeon. This dish is popular with native Siberians, and is present in Yakutian cuisine, Eskimo cuisine, Komi cuisine and Yamal cuisine. It is often paired with vodka.

Frozen fish is used for the preparation of stroganina. The fish for stroganina is usually caught by ice fishing during the late fall and fresh frozen in order to avoid the formation of ice crystals in the meat. Frozen fish can be glazed with near-freezing ice water in order to avoid dehydration and better-preserve the fish meat in a frozen state. The fish is typically frozen straight, without bending its body.

Before the preparation of stroganina, strips of skin are cut from the back and abdomen from tail to head. Vertical incisions are made in the flesh. The fish is placed head down on a hard surface and skinned. Thin slices of fish fillet cut along the body using a sharp knife. The geometry of the Yakutian knife is best suited to cut long slices that will form ribbon curls. In order to keep the slices frozen as long as possible, the stroganina is served immediately on non-metallic frozen plates or in ice-cold bowls with salt and black pepper powder. It is usually eaten with the hands while still frozen.

A variation of the dish is molochnaya stroganina, which is prepared using stroganina and frozen fresh milk.

The name is also applied to stroganina from reindeer meat.

All content from Kiddle encyclopedia articles (including the article images and facts) can be freely used under Attribution-ShareAlike license, unless stated otherwise. Cite this article:
Stroganina Facts for Kids. Kiddle Encyclopedia.