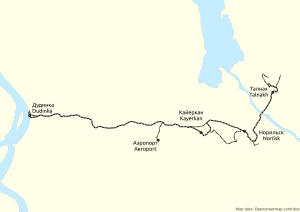 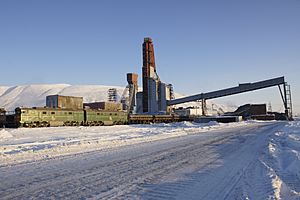 The Mayak mine, near Talnach

The Norilsk railway connects the river port of Dudinka with the mining towns of Kayerkan, Norilsk, and Talnach. Different ore mines and industries are also connected to the line. The line has a single track. Originally, it was done as a narrow-gauge railway (gauge: 1m); later it was re-done as a Russian standard gauge (of 1.5m). It used to be electrified, but this was removed in the 1990s. Since then it only runs freight trains.

A paved highway from Dudinka to Norilsk was built in the 1990s; since then, the Norilsk railway no longer runs passenger services.

The railway is owned by the mining company.

All content from Kiddle encyclopedia articles (including the article images and facts) can be freely used under Attribution-ShareAlike license, unless stated otherwise. Cite this article:
Norilsk railway Facts for Kids. Kiddle Encyclopedia.