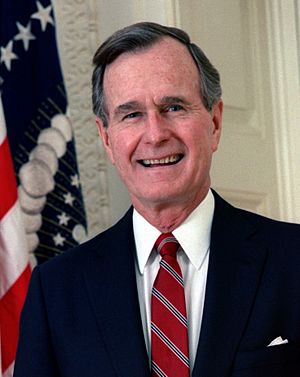 Bush was the first president to die since Gerald Ford in 2006, and, at the age of 94 years and 171 days, he surpassed Ford for the title of longest-lived U.S. president in history.

Shortly after news broke of Bush's death, on December 5, 2018, Donald Trump declared a National Day of Mourning and ordered all flags "throughout the United States and its Territories and possessions" lowered to half staff for the remainder of the year.

The state funeral of Bush is the official funerary rites conducted by the Government of the United States. He will be interred at the George Bush Presidential Library. The state funeral and respective activities are scheduled to occur over a period of four days from December 3 to December 6, 2018.

Very early on the morning of December 1, 2018, the flags at the White House were lowered to half staff. 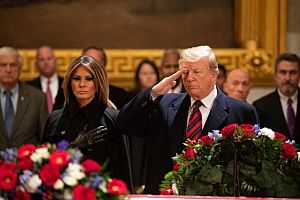 Before his death, Bush filed a 211-page document with the Military District of Washington, which had a request for an aerial flyover of fighter jets in missing man formation by the United States Air Force during his state funeral, as well as final interment and burial to occur at the George Bush Presidential Library in College Station, Texas.

Bush made plans for a national funeral service to be held at Washington National Cathedral in Washington, D.C.

All content from Kiddle encyclopedia articles (including the article images and facts) can be freely used under Attribution-ShareAlike license, unless stated otherwise. Cite this article:
Death and state funeral of George H. W. Bush Facts for Kids. Kiddle Encyclopedia.