Flag of Kyrgyzstan facts for kids 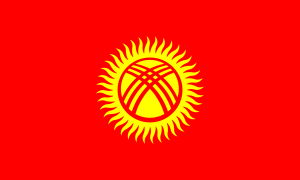 The flag of Kyrgyzstan was created in 1992. The flag has a red background with a yellow sun that consists of 40 flames to represent the 40 tribes. The X shape in the middle is a Yurt.

It has a red field charged with a yellow sun with forty uniformly spaced rays; the sun is crossed by two sets of three lines.

All content from Kiddle encyclopedia articles (including the article images and facts) can be freely used under Attribution-ShareAlike license, unless stated otherwise. Cite this article:
Flag of Kyrgyzstan Facts for Kids. Kiddle Encyclopedia.