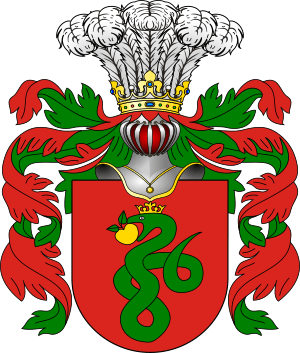 Apollinaire is considered one of the foremost poets of the early 20th century, as well as one of the most impassioned defenders of Cubism and a forefather of Surrealism. He is credited with coining the term "cubism" in 1911 to describe the emerging art movement and the term "surrealism" in 1917 to describe the works of Erik Satie. The term Orphism (1912) is also his. Apollinaire wrote one of the earliest Surrealist literary works, the play The Breasts of Tiresias (1917), which became the basis for the 1947 opera Les mamelles de Tirésias.

Two years after being wounded in World War I, Apollinaire died in the Spanish flu pandemic of 1918; he was 38. 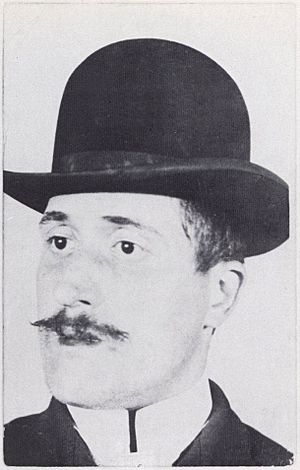 Wilhelm Albert Włodzimierz Apolinary Kostrowicki was born in Rome, Italy, and was raised speaking French, Italian, and Polish. He emigrated to France in his late teens and adopted the name Guillaume Apollinaire. His mother, born Angelika Kostrowicka, was a Polish noblewoman born near Navahrudak, Grodno Governorate (present-day Belarus). His maternal grandfather was a general in the Russian Imperial Army who was killed in the Crimean War. Apollinaire's father is unknown but may have been Francesco Costantino Camillo Flugi d'Aspermont (born 1835), a Graubünden aristocrat who disappeared early from Apollinaire's life. Francesco Flugi von Aspermont was a nephew of Conradin Flugi d'Aspermont (1787–1874), a poet who wrote in ladin putèr (an official language dialect of Switzerland spoken in Engiadina ota), and perhaps also of the Minnesänger Oswald von Wolkenstein (born c. 1377, died 2 August 1445; see Les ancêtres Grisons du poète Guillaume Apollinaire at Généanet).

Apollinaire eventually moved from Rome to Paris and became one of the most popular members of the artistic community of Paris (both in Montmartre and Montparnasse). His friends and collaborators in that period included Pablo Picasso, Henri Rousseau, Gertrude Stein, Max Jacob, André Salmon, André Breton, André Derain, Faik Konitza, Blaise Cendrars, Pierre Reverdy, Alexandra Exter, Jean Cocteau, Erik Satie, Ossip Zadkine, Marc Chagall, Marcel Duchamp and Jean Metzinger. He became romantically involved with Marie Laurencin, who is often identified as his muse. While there, he dabbled in anarchism and spoke out as a Dreyfusard in defense of Dreyfus's innocence.

In late 1909 or early 1910, Metzinger painted a Cubist portrait of Apollinaire. In his Vie anecdotique (16 October 1911), the poet proudly writes: "I am honoured to be the first model of a Cubist painter, Jean Metzinger, for a portrait exhibited in 1910 at the Salon des Indépendants." It was not only the first Cubist portrait, according to Apollinaire, but it was also the first great portrait of the poet exhibited in public, prior to others by Louis Marcoussis, Amedeo Modigliani, Mikhail Larionov and Picasso. 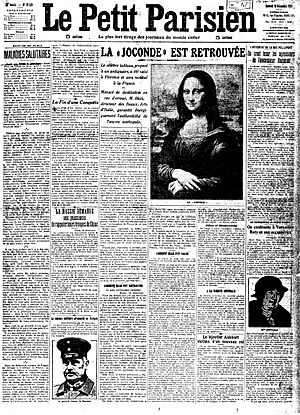 In 1911 he joined the Puteaux Group, a branch of the Cubist movement soon to be known as the Section d'Or. The opening address of the 1912 Salon de la Section d'Or—the most important pre-World War I Cubist exhibition—was given by Apollinaire.

Apollinaire fought in World War I and, in 1916, received a serious shrapnel wound to the temple, from which he would never fully recover. He wrote Les Mamelles de Tirésias while recovering from this wound. During this period he coined the word "Surrealism" in the programme notes for Jean Cocteau's and Erik Satie's ballet Parade, first performed on 18 May 1917. He also published an artistic manifesto, L'Esprit nouveau et les poètes. Apollinaire's status as a literary critic is most famous and influential in his recognition of the Marquis de Sade, whose works were for a long time obscure, yet arising in popularity as an influence upon the Dada and Surrealist art movements going on in Montparnasse at the beginning of the twentieth century as, "The freest spirit that ever existed."

The war-weakened Apollinaire died of influenza during the Spanish flu pandemic of 1918. He was interred in the Père Lachaise Cemetery, Paris.

Apollinaire is played by Seth Gabel in the 2018 television series Genius, which focuses on the life and work of Pablo Picasso.

All content from Kiddle encyclopedia articles (including the article images and facts) can be freely used under Attribution-ShareAlike license, unless stated otherwise. Cite this article:
Guillaume Apollinaire Facts for Kids. Kiddle Encyclopedia.