The Albright–Knox Art Gallery is an art museum located at 1285 Elmwood Avenue, Buffalo, New York, in Delaware Park. The Albright-Knox's Elmwood Avenue campus is temporarily closed for construction. It is currently hosting exhibitions and events at Albright-Knox Northland, a project space located at 612 Northland Avenue in Buffalo’s Northland Corridor. The new Buffalo Albright Knox Gundlach Art Museum (AKG) is expected to open in 2022.

The gallery is a major showplace for modern art and contemporary art. It is located directly opposite Buffalo State College and the Burchfield Penney Art Center. 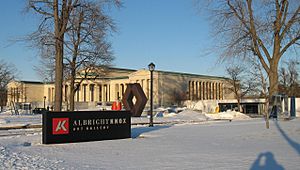 The parent organization of the Albright–Knox Art Gallery is the Buffalo Fine Arts Academy, founded in 1862, one of the oldest public arts institutions in the United States. On January 15, 1900, Buffalo entrepreneur and philanthropist John J. Albright, a wealthy Buffalo industrialist, donated funds to the Academy to begin construction of an art gallery. The building was designed by prominent local architect Edward Brodhead Green. It was originally intended to be used as the Fine Arts Pavilion for the Pan-American Exposition in 1901, but delays in its construction caused it to remain uncompleted until 1905. When it finally opened its doors on May 31, 1905, it was named the Albright Art Gallery. 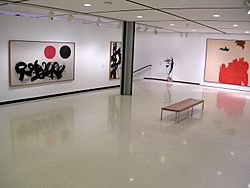 In 1962, a new addition was made to the gallery through the contributions of Seymour H. Knox, Jr. and his family, and many other donors. At this time the museum was renamed the Albright–Knox Art Gallery. The new building was designed by Skidmore, Owings and Merrill architect Gordon Bunshaft, who is noted for the Lever House in New York City. The Albright–Knox Art Gallery is listed in the National Register of Historic Places.

The museum first began discussing a possible expansion in 2001. In 2012, the board commissioned the architectural firm Snøhetta to produce a master plan for future growth. In 2014, the board voted to initiate a museum expansion and, in June 2016, the museum announced its selection of OMA partner Shohei Shigematsu as the architect for the project. Doubleline CEO and Buffalo native Jeffrey Gundlach has pledged $42.5 million to the project, while businesses, foundations, government groups, and individuals have promised matching funds toward a $125 million goal. 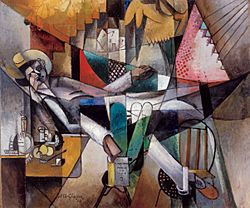 The Albright–Knox Art Gallery has long operated not by collecting artists' work in depth but by trying to acquire key works. The gallery's collection includes several pieces spanning art throughout the centuries. Impressionistic and Post-Impressionistic styles can be found in works by artists of the nineteenth century such as Paul Gauguin and Vincent van Gogh.

Revolutionary styles from the early twentieth century such as cubism, surrealism, constructivism are represented in works by artists like Pablo Picasso, Georges Braque, Jean Metzinger, Albert Gleizes, Henri Matisse, André Derain, Joan Miró, Piet Mondrian, and Alexander Rodchenko. Frida Kahlo is represented by Self-Portrait with Monkey. Because of Seymour H. Knox and Gordon M. Smith, a former director, the Albright-Knox was one of the first museums to collect Abstract Expressionism in depth.

More modern pieces showing styles of abstract expressionism, pop art, and art of the 1970s through the end of the century can also be found represented by artists such as Arshile Gorky, Jackson Pollock, Clyfford Still, and Andy Warhol. Additionally, the gallery is also rich in various pieces of post-war American and European art; their contemporary collection includes pieces by artists such as Kiki Smith, Allan Graham, Georg Baselitz, John Connell, and Per Kirkeby. The museum bought Anselm Kiefer's large-scale Die Milchstrasse (The Milkyway) (1985–87) in 1988 to celebrate its 125th anniversary.

The Albright-Knox's current exhibition space can accommodate only 200 works — just 3% of its 6,740-piece collection.

The Albright-Knox has more than 6,500 works in its collection, below is a list highlighting a few other notable paintings:

The gallery contains a variety of sculptures on the exterior grounds. Some of the most notable, from the past and the present, include:

Deaccessioning and the Albright-Knox's mission 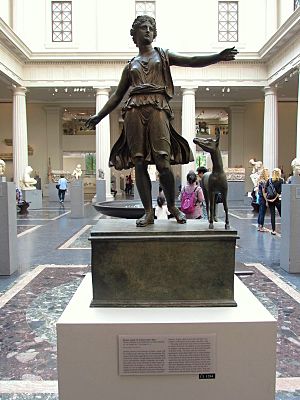 Artemis and the Stag, on display at the Metropolitan Museum of Art.

In 2007, the Albright–Knox Art Gallery deaccessioned a Roman-era bronze sculpture, Artemis and the Stag, that was auctioned at Sotheby's New York on June 7, 2007, and brought $28.6 million. This was the highest price ever paid at auction for an antiquity or a sculpture of any period, according to Sotheby's. It was purchased by the London dealer Giuseppe Eskenazi on behalf of a private European collector.

The event brought national attention to what until then had been a local question, the mission of the Albright-Knox. In February 2007, when the list of works to be deaccessioned was made public, Albright-Knox Director Louis Grachos defined the ancient sculpture as falling outside the institution's historical "core mission" of "acquiring and exhibiting art of the present." This definition made public critics wonder whether the position at the Gallery of "William Hogarth's Lady's Last Stake or Sir Joshua Reynolds' Cupid as a Link Boy were secure. Works by Gustave Courbet, Honoré Daumier, Jacques-Louis David and Eugène Delacroix had been purchased by the museum in earlier decades.

The decision to deaccession certain art works was made by a vote of the museum's Board of Directors, was voted on and ratified by the entire membership, and followed the guidelines of the American Alliance of Museums. The sale raised questions about how museums can remain vital when they are situated in economically declining regions and have limited means for raising funds for operations and acquisitions. 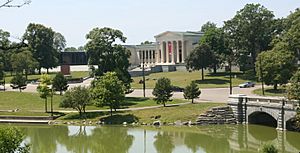 Since 2013, Janne Sirén has been director of the Albright–Knox Art Gallery. Sirén is believed to be the first director from the Nordic region to take the helm of a major American art museum.

As of 2007, the Albright–Knox Art Gallery's endowment stood at about $58 million, generating about $1.1 million a year for acquisitions. Since the proceeds from the sale of some 200 works of art in 2007 were added to the preexisting $22 million acquisitions endowment, the museum has been able to spend as much as almost $5 million on new art annually. In 2013, the Albright–Knox Art Gallery received an $11 million bequest from the estate of longtime board member and Buffalo arts patron Peggy Pierce Elfvin, possibly the largest single gift in the museum's history.

All content from Kiddle encyclopedia articles (including the article images and facts) can be freely used under Attribution-ShareAlike license, unless stated otherwise. Cite this article:
Albright–Knox Art Gallery Facts for Kids. Kiddle Encyclopedia.