Millau is a commune in southern France, in the region of Midi-Pyrénées. It is the sous-prefecture (capital) of the arrondissement of the same name in the Aveyron department. It is also the capital of two cantons: Millau-1 and Millau-2.

The territory of the municipality is part of the Regional Natural Park of Grands Causses.

The inhabitants of this city are known, in French, as millavois (women: millavoises). 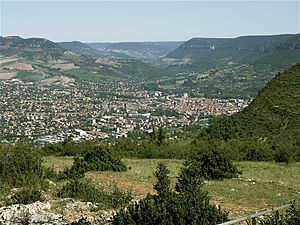 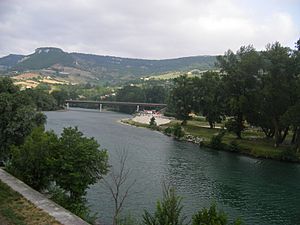 The Tarn river at Millau

The town is in the valley of the Tarn river and is at the confluence of the Tarn and Dourbie rivers. The territory of the commune is in the Grand Causses over part of the Causse Rouge (to the east of the Lévézou plateau), the Causse du Larzac, and the Causse Noir.

The climate of the Millau is subtropical with dry-summer, Csb (Mediterranean Climate) in the Köppen climate classification.

The Millau Viaduct is a cable-stayed bridge that spans the valley of the Tarn river near Millau.

Millau is twinned with:

Arrondissements of the Aveyron department

All content from Kiddle encyclopedia articles (including the article images and facts) can be freely used under Attribution-ShareAlike license, unless stated otherwise. Cite this article:
Millau Facts for Kids. Kiddle Encyclopedia.