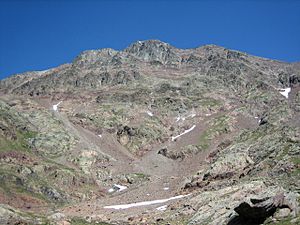 Pica d'Estats (Catalan and Spanish: Pica d'Estats, French: Pic d'Estats) is a 3,143-m-high mountain in the Montcalm Massif, Pyrenees. on the Spanish–French border.

The summit of this mountain is on the border of the Regional Natural Park of the Pyrenees of Ariége (French: Parc naturel régional Pyrénées Ariègeoises). The Pica d'Estats is in a group of mountains that forms the Massif du Montcalm, and is the highest of the mountains in the East-Central Pyrennes.

The summit has three peaks, all very close to each other:

The group of three peaks runs north-northwest to southeast along the Spanish–French border. 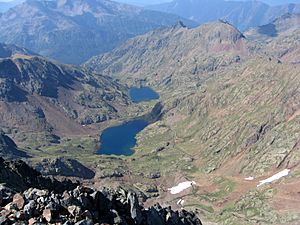 The summit of Pique d'Estats is made of granite.

Even with its altitude, the Pique d'Estats does not have much snow.

The first ascent of this peak was made by Corabœuf & Jean-Jacques Testu in 1827. Henry Russell climbed this peak on June 1864.

All content from Kiddle encyclopedia articles (including the article images and facts) can be freely used under Attribution-ShareAlike license, unless stated otherwise. Cite this article:
Pica d'Estats Facts for Kids. Kiddle Encyclopedia.