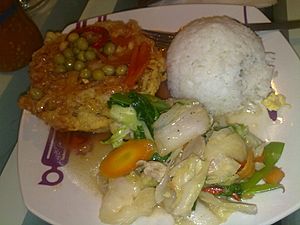 Literally meaning "Hibiscus egg", this dish is prepared with beaten eggs and most often made with various vegetables such as bean sprouts, bamboo shoots, sliced cabbage, spring onions, mushrooms, and water chestnuts. When meat is used as an ingredient, a choice of roast pork, shrimp, chicken, beef, or lobster may be offered.

In Chinese Indonesian cuisine, it is known as fu yung hai, sometimes spelled pu yung hai. The omelette is usually made from the mixture of vegetables such as carrots, bean sprouts, and cabbages, mixed with meats such as crab meat, shrimp, or minced chicken. The dish is served in sweet and sour sauce with peas.

In Western countries, the dish usually appears as a well-folded omelette with the non-egg ingredients embedded in the egg mixture. In America, it may be covered in or served with sauce or gravy. Chinese chefs in the United States, at least as early as the 1930s, created a pancake filled with eggs, vegetables, and meat or seafood. In a U.S. regional variation, many American-Chinese restaurants in St. Louis, Missouri, serve what is called a St. Paul sandwich, which is an egg foo young patty served with mayonnaise, dill pickle, and sometimes lettuce and tomato between two slices of white bread.

In the Netherlands, which has a local variation on the Chinese Indonesian cuisine, it is known as Foe yong hai, and is usually served with a sweet tomato sauce. Strictly, according to hai in the name, it should contain crab, but it is often served without this ingredient.

In Japanese Chinese cuisine, the dish kani-tama (かに玉 or 蟹玉) is similar, using crab meat instead of ham or other meats. Egg foo yung or kani-tama on plain rice draped with thick savory sauce is called ‘’Tenshin-han’’ (天津飯, ‘’Tianjin rice’’), even though no such dish is known in the actual Chinese city of Tianjin.

Certain incarnations of the Korean-Chinese dish jjajang bokkeumbap (짜장 볶음밥) are similar; in essence the dish consists of jjajang (a dark brown-black bean and meat sauce) and fried rice, with an optional fried egg or egg-foo-young-like omelet atop the rice.

In Malay cuisine, it is similar to telur bungkus, which literally means "wrapped egg" (the wrap usually contains chicken or beef, onions, mushrooms, vegetables, and gravy, wrapped inside the egg).

All content from Kiddle encyclopedia articles (including the article images and facts) can be freely used under Attribution-ShareAlike license, unless stated otherwise. Cite this article:
Egg foo young Facts for Kids. Kiddle Encyclopedia.