Kashiwa Reysol is a Japanese professional football club based in Kashiwa, Chiba. The team competes in the J. League Division 1 from 2011 season.

Formed in 1940, Reysol were founding members of Japan Soccer League in 1965 and have spent the majority of their existence in the top tier of Japanese football. They have been Japanese league champions twice, in 1972 and 2011, and have won three Emperor's Cups.

Reysol have a rivalry with neighbours JEF United Chiba and the two sides contest the Chiba derby. The club have been based at Hitachi Kashiwa Soccer Stadium since 1985. 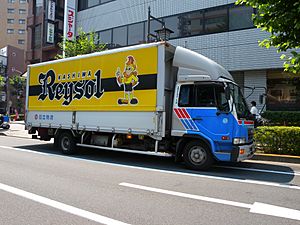 Founded in 1940 as Hitachi, Ltd. Soccer Club in Kodaira, Tokyo, the team was a founding member of the Japan Soccer League. It had some success during the mid-1970s, winning several Emperor's Cup and JSL titles and contributing several players to the Japanese national team.

In 1986, the team relocated from Kodaira to Kashiwa, but it took a while to adapt to the new town. The team joined the Japan Football League in 1992. From 1995, it was in the J1 and in 1998, the team welcomed the former manager for Japan's Olympic team, Akira Nishino as its manager. In 1999, it won its first title, the Nabisco Cup Championship. The 1999 and 2000 seasons marked a relative high-point in the club's history.

All content from Kiddle encyclopedia articles (including the article images and facts) can be freely used under Attribution-ShareAlike license, unless stated otherwise. Cite this article:
Kashiwa Reysol Facts for Kids. Kiddle Encyclopedia.