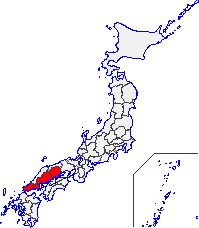 The region is generally considered to include the prefectures of Okayama, Hiroshima and Yamaguchi. Sometimes, the section of Hyōgo Prefecture that formerly comprised Harima Province is considered to be within the region as well.

All content from Kiddle encyclopedia articles (including the article images and facts) can be freely used under Attribution-ShareAlike license, unless stated otherwise. Cite this article:
San'yō region Facts for Kids. Kiddle Encyclopedia.