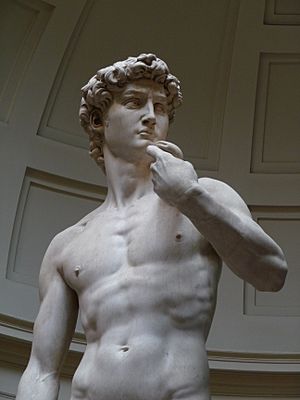 David is a statue by Michelangelo, begun in 1501 and completed in 1504. It is made of marble and is 17 feet tall. It is a statue of a shepherd, David, whose story is told in the Bible. David fought a battle with a giant soldier called Goliath. He beat Goliath by knocking him down with a small stone from his slingshot. David later became King of Israel.

Michelangelo has carved the figure naked, in the way that Ancient Roman statues of Classical Gods were often made. He shows David before the fight, just as he is looking at Goliath and planning what to do.

The statue was paid for by the wool-workers of Florence. To the people of the Republic of Florence, David, the teenage boy who fought a giant, was a symbol of how a small fierce town could battle off powerful invaders. David was a particularly important symbol to the wool-workers as well, because as a boy, he took care of his father’s sheep, and as a king, he was like a shepherd to his people.

The statue of David is a symbol of the City of Florence, Italy, and is Michelangelo's most famous work of sculpture. It is often called The David. 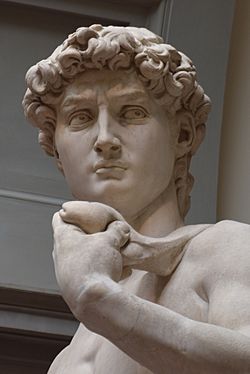 From about 1464 the members of the Wool Guild wanted to have twelve statues of people from the Old Testament of the Bible carved for the Florence Cathedral. These statues were to go on the buttresses all around the outside walls, high up near the roof. Two statues had already been made by Donatello and his assistant, Agostino di Duccio. Duccio was asked to carve a statue of David. He began carving the statue's feet, chest and a hole between the legs. He stopped making the statue when his master, Donatello, died in 1466. Antonio Rossellino then worked on the statue for two years. The block of stone was untouched for 33 years and was left in the cathedral workshop where it was getting damaged by the weather. Michelangelo began working on David on September 13, 1501. It was finished on September 8, 1504.

Where the statue was placed

Damage to the statue

In 1991, the statue of David was attacked by a person with a hammer. Before the person with the hammer could be stopped, damage was done to the toes of the left foot.

The following are other statues by Michelangelo:

All content from Kiddle encyclopedia articles (including the article images and facts) can be freely used under Attribution-ShareAlike license, unless stated otherwise. Cite this article:
David (Michelangelo) Facts for Kids. Kiddle Encyclopedia.