The Memorial to Robert Gould Shaw and the Massachusetts Fifty-Fourth Regiment is a bronze relief sculpture by Augustus Saint-Gaudens opposite 24 Beacon Street, Boston (at the edge of the Boston Common). It depicts Colonel Robert Gould Shaw leading members of the 54th Regiment Massachusetts Volunteer Infantry as it marched down Beacon Street on May 28, 1863 to depart the city to fight in the South. The sculpture was unveiled on May 31, 1897. This is the first civic monument to pay homage to the heroism of African American soldiers.

The monument marks Shaw's death on July 18, 1863 after he and his troops attacked Fort Wagner, one of two forts protecting the strategic Confederate port of Charleston, South Carolina. Joshua Bowen Smith, a Massachusetts state legislator, led the effort to obtain authorization for the monument; others participating in its early planning included Governor John Albion Andrew, who had urged Shaw to take command of the 54th Regiment, Samuel Gridley Howe, and Senator Charles Sumner. The monument was meant to show the public's gratitude to Shaw and commemorate the events that recognized the citizenship of Black men.

Fundraising for the monument, led by the survivors of the 54th Massachusetts Volunteer Infantry and emancipated Black people from Beaufort, South Carolina, began immediately after the battle, but funds were redirected because the Beaufort site was found unsuitable and local white people expressed resentment.

Restoration of the monument began on May 20, 2020, and is expected to be completed in January 2021. The memorial will be removed and taken to an offsite location for restoration that is scheduled to take five to six months. While the bronze sculpture is being cleaned and repaired, a new concrete foundation will be built. The project will cost $2.8 million and includes an augmented reality mobile app that will assist visitors in experiencing the monument. There will be new signage detailing the history of the Civil War, the 54th Regiment, and the monument itself, with QR codes for the AR app.

In July 2020, the monument became a focus of discussion during the iconoclasm that took place as part of the George Floyd protests.

Saint-Gaudens created distinct features for each of the African-American soldiers, distinguishing them as individuals, along with their commanding officer. The work was dedicated by philosopher William James of Harvard:

There they march, warm-blooded champions of a better day for man. There on horseback among them, in his very habit as he lived, sits the blue-eyed child of fortune, upon whose happy youth every divinity had smiled.

—Oration by William James at the exercises in the Boston Music Hall, May 31, 1897, upon the unveiling of the Shaw Monument.

A Latin inscription on the relief reads OMNIA RELINQVIT / SERVARE REMPVBLICAM ("He left behind everything to save the Republic"). The pedestal below carries lines from James Russell Lowell's poem "Memoriae Positum":

Right in the van of the red rampart's slippery
swell with heart that beat a charge he fell
foeward as fits a man: but the high soul burns
on to light men's feet where death for noble
ends makes dying sweet.

On the rear are words by Charles W. Eliot, president of Harvard University:

The White Officers taking life and honor in their hands cast in their lot with men of a despised race unproven in war and risked death as inciters of servile insurrection if taken prisoners besides encountering all the common perils of camp march and battle. The Black rank and file volunteered when disaster clouded the Union Cause. Served without pay for eighteen months till given that of white troops. Faced threatened enslavement if captured. Were brave in action. Patient under heavy and dangerous labors. And cheerful amid hardships and privations. Together they gave to the Nation and the World undying proof that Americans of African descent possess the pride, courage and devotion of the patriot soldier. One hundred and eighty thousand such Americans enlisted under the Union Flag in MDCCCLXIII–MDCCCLXV. [1863-1865] 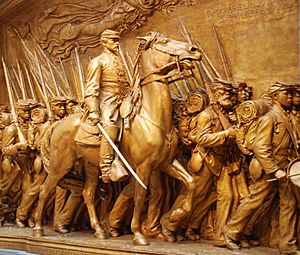 Restored plaster cast at the National Gallery of Art

A plaster cast, which was exhibited at the 1901 Pan-American Exposition, is displayed at the National Gallery of Art, on loan by the Saint-Gaudens National Historic Site, Cornish, New Hampshire. The inscription running along the bottom of this plaster cast incorrectly states that the assault on Fort Wagner and Shaw's death in 1863 occurred "JULY TWENTY THIRD," five days later than the historic events.

All content from Kiddle encyclopedia articles (including the article images and facts) can be freely used under Attribution-ShareAlike license, unless stated otherwise. Cite this article:
Robert Gould Shaw Memorial Facts for Kids. Kiddle Encyclopedia.