Aspelta was a ruler of the kingdom of Kush (c. 600 – c. 580 BCE). More is known about him and his reign than most of the rulers of Kush. He left several stelae carved with accounts of his reign.

According to relevant inscriptions, Aspelta was selected as ruler by a committee of twenty-four religious and military leaders. He then set out north to Napata to be selected as king by the gods and crowned.

Another stele that might date from Aspelta's reign recounts how a group of priests were put to death, likely as punishment for conspiring against the king.

In 592 BCE, Kush was invaded by an Egyptian military expedition initiated by Pharaoh Psamtik II perhaps because Aspelta posed a threat to this pharaoh's authority over Upper Egypt, to the south and close to Kush. The invaders sacked Napata, and some historians believe that because of this attack, Aspelta decided to move the Nubian capital to the more secure city of Meroe. 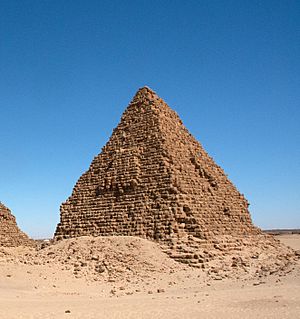 Nuri pyramid Nu VIII of King Aspelta, the best preserved of the pyramids in Nuri.

Aspelta is well attested. A list of items mentioning the King:

All content from Kiddle encyclopedia articles (including the article images and facts) can be freely used under Attribution-ShareAlike license, unless stated otherwise. Cite this article:
Aspelta Facts for Kids. Kiddle Encyclopedia.