Roden Crater is a cinder cone type of volcanic cone from an extinct volcano, with a remaining interior volcanic crater. It is located approximately 50 miles northeast of the city of Flagstaff in northern Arizona, United States. 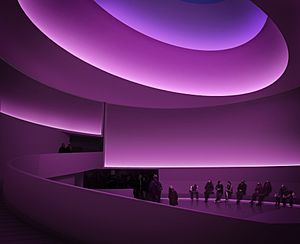 Artist James Turrell acquired the 400,000-year-old, 3-mile-wide (4.8 km) crater's land for a land art project. Turrell has since been transforming the inner cone of the crater into a massive naked-eye observatory, designed specifically for viewing and experiencing sky-light, solar, and celestial phenomena. The fleeting winter and summer solstice events will be highlighted. Kanye West filmed his 2019 movie Jesus Is King at Roden Crater and praised Turrell as one of the greatest living artists.

The Dia Art Foundation is continuing to advocate for the development of James Turrell's Roden Crater project in the Painted Desert in Arizona which was begun in the 1970s with Dia's support. James Turrell, who purchased the Roden Crater in 1979, had plans to open the crater for public viewing in 2011, but now has tentatively set the opening for 2024.

A fundraising event held daily from May 14 to 17, 2015, allowed visitors to tour Roden Crater for a cost of $6,500 to Turrell's nonprofit organization.

All content from Kiddle encyclopedia articles (including the article images and facts) can be freely used under Attribution-ShareAlike license, unless stated otherwise. Cite this article:
Roden Crater Facts for Kids. Kiddle Encyclopedia.