The Arboretum was formerly the estate of John T. (1847-1915) and Lydia T. Morris (1849-1932), a brother and sister who purchased and landscaped much of the arboretum's current site beginning in 1887. John Morris was interested in growing plants from around the world, including those collected in China by E. H. Wilson around 1900, and many of today's specimens date to Morris' original plantings. The estate became a public arboretum in 1933, after Lydia Morris' death. 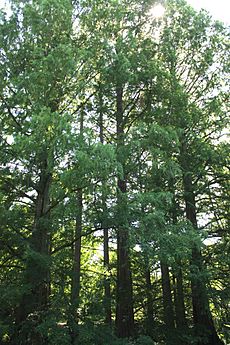 The arboretum is set within a fine, mature landscape, primarily designed in the English park style but with Japanese influences. It includes winding paths and streams, a swan pond, formal rose gardens, and large sweeps of azaleas, rhododendrons, and magnolias. Notable aspects of the arboretum are as follows: 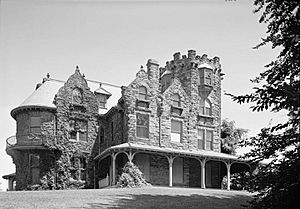 Morris Arboretum also owns Springfield Mill, which is located opposite the main entrance. The grist mill has been restored and is open to the public once a month for grinding demonstrations.

All content from Kiddle encyclopedia articles (including the article images and facts) can be freely used under Attribution-ShareAlike license, unless stated otherwise. Cite this article:
Morris Arboretum Facts for Kids. Kiddle Encyclopedia.