Flag of Jordan facts for kids 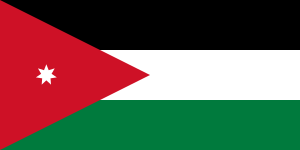 The flag of Jordan was created in 1928, is based on the flag of the Arab Revolt against the Ottoman Empire during World War I.

It has a horizontal bands of black, white and green; with a red chevron based on the hoist-side containing a white seven-pointed star.

All content from Kiddle encyclopedia articles (including the article images and facts) can be freely used under Attribution-ShareAlike license, unless stated otherwise. Cite this article:
Flag of Jordan Facts for Kids. Kiddle Encyclopedia.