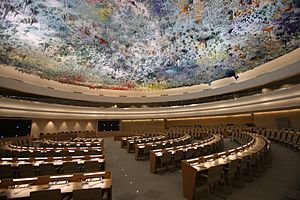 The meeting room of the United Nations Human Rights Council.

The General Assembly made the UNHRC on 15 March 2006. This was to replace the previous CHR. People did not like the CHR because they allowed countries with poor human rights records to be members.

UN Secretary General Ban Ki Moon and former United Nations High Commissioner for Human Rights Mary Robinson have not liked that the council acts for politics instead of human rights. Several people have said the council focuses too much on the Israeli–Palestinian conflict. The United States did not take part in the Council when George W. Bush was president. They changed when Barack Obama became President.

On 18 June 2007, the UNHRC made a plan for future work. They will assess the human rights in all 192 UN Member States. They will also allow people and organizations to bring complaints about human rights violations to the attention of the Council.

All content from Kiddle encyclopedia articles (including the article images and facts) can be freely used under Attribution-ShareAlike license, unless stated otherwise. Cite this article:
United Nations Human Rights Council Facts for Kids. Kiddle Encyclopedia.