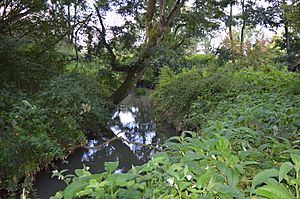 The River Flit is a short river in Bedfordshire, England. Its name is not ancient, but rather a back formation from Flitton which originally meant that the river was spelt with as Flitt rather than Flit.

Flowing north, it reaches Flitwick, then north east past Greenfield and Flitton, then through Clophill, Chicksands, and Shefford, where it is joined by the River Hit, then past Stanford, before meeting the River Ivel at Langford.

Below its junction with the River Hit, the 5 kilometres (3.1 mi) of its course was largely incorporated into a canal, known as the Shefford Canal or River Ivel Navigation. Completed in 1823, the canal connected Shefford with the North Sea allowing barges of coal to be brought to the town. The canal fell into decline over the following decades and in 1876 a dam was installed on the Ivel at Sandy, closing the Shefford section for good. Today, sections of the canal near Shefford are dry or have been filled in.

All content from Kiddle encyclopedia articles (including the article images and facts) can be freely used under Attribution-ShareAlike license, unless stated otherwise. Cite this article:
River Flit Facts for Kids. Kiddle Encyclopedia.