Kids Encyclopedia Facts
This page is about the river in Hertfordshire and Bedfordshire. For the river in Somerset, see River Yeo (South Somerset). 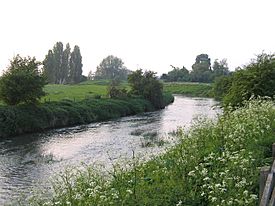 The river at Biggleswade

The River Ivel is a north-flowing river in the western part of east of England. It is primarily in Bedfordshire; it is a tributary of the River Great Ouse and has sources including in the Barton Hills.

The river Ivel has four headwaters of equivalent size. By settled convention its name is given frequently to the lower part of the Flit in the south-west and all of its separate south-east headwater which rises in the north of the parish of Baldock in the far north of Hertfordshire. The rest of its course and catchment area is in Bedfordshire. It flows through the parishes of Stotfold, Arlesey, Henlow, Langford, Biggleswade, Sandy and Blunham. It joins the Great Ouse at Tempsford. The total length is about 16 miles (26 km).

The watercourse suddenly develops a low gradient. From the Flit confluence to Blunham lakes near its discharge, including parts of the town of Sandy the adjoining land is designated as a Flood Warning Area. The updated map of which area is, using computer flood-risk models and factors such as latest prevention measures, published by the Environment Agency.

The Kingfisher Way is a nature trail of 21 miles (34 km), which mostly follows the valley floor from the source at Ivel Springs in Baldock through to its confluence with the River Great Ouse at Tempsford.

Plans for a canal for the River Ivel were first announced in 1756. Locks were built in 1758 at Tempsford, Blunham, South Mills and Sandy. Tolls were initially lower than advertised leaving construction capital creditors including members of its maintenance committee in debt. Trade increased rapidly and such loans were redeemed in 1780. The canal was extended to Shefford, with locks at Biggleswade, Holme, Stanford and Clifton; reaching Shefford in 1823.

The canal was abandoned in 1876 when a dam was built across it at Sandy, the relevant Private Act of Parliament being passed in the same year.

A wall of the former wharf at Shefford is beside a bridge over the Flit (tributary).

A maintained towpath adjoins the canalized river. After crossing the footbridge over the River Hit, the path continues straight ahead for some way until the river returns. The canal, made from the river, used to run immediately to the left of the path, but was filled in after World War II as it was considered dangerous. The present course of the river there was originally the millstream for Shefford Mill, close to the remains of the tower mill still visible.

Further on, to the east of the village of Stanford a wooden footbridge crosses the river at the site of Stanford Lock, one of the best preserved on the old canal.

The Ivel is no longer navigable to barges and is too narrow in many places along its length for single sculling. It can be canoed with care or punted in good conditions for 11 km between Biggleswade upriver to the junction with the Ouse which can equally be canoed, at Tempsford.

Its fishing rights are owned by a mixture of:

All content from Kiddle encyclopedia articles (including the article images and facts) can be freely used under Attribution-ShareAlike license, unless stated otherwise. Cite this article:
River Ivel Facts for Kids. Kiddle Encyclopedia.