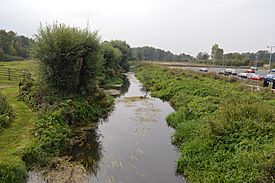 The river in Arlesey

The Hicca Way, inaugurated in 2012, is a footpath which follows the course of the river.

The Hiz is a focal point in the town of Hitchin, with a market that takes place historically by its banks. The Hiz also runs past the Arlesey Old Moat and Glebe Meadows nature reserve in Arlesey.

Although small, the Hiz attracts a great deal of wildlife. There are many birds around this area, which include swans, ducks, coot and kingfishers. Fish inhabit the river (trout mainly) and there is also evidence of otters.

The z in Hiz is a Domesday-Book abbreviation for ts (or tch), and Hiz is properly pronounced "Hitch". This fact seems to be little known, and Hiz is now normally said as it is spelled. It may take its name from the Hicce tribe, who inhabited the area and gave their name to Hitchin. Ekwall says that Hiz/Hitch is a probably back-formation from Hitchin, which in turn is the dative plural of Hicce.

Norden says the name is derived from a wood called Hitch, but Ekwall believes this is a conflation with Wychwood, for which the Old English is Hwiccawudu.

All content from Kiddle encyclopedia articles (including the article images and facts) can be freely used under Attribution-ShareAlike license, unless stated otherwise. Cite this article:
River Hiz Facts for Kids. Kiddle Encyclopedia.