Barton Hills are situated southeast of the village of Barton-le-Clay in the English county of Bedfordshire. They are part of the Chilterns and hiking routes are marked on maps at the entrance to the hills. From the foot of the hillside, a spring (Barton Springs) marks the start of a chalk stream river. During the summer, Dartmoor ponies roam the hills. 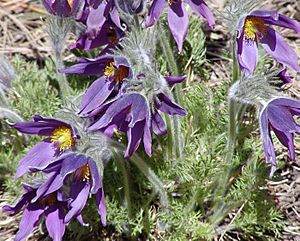 A large part of the area is managed by Natural England as a national nature reserve. The reserve is also designated as a Site of Special Scientific Interest.

The steep well-grazed slopes are a classic downland habitat, however there were no sheep on the hills from about 1930 until the 1980s and woodland has formed on the hillside to the west of the stream which issues from Barton Springs. The reserve is the main site in Bedfordshire for the pasqueflower (Pulsatilla vulgaris), and in some years over a thousand flowers are present. Other unusual plants are field fleawort and a dwarf form of hairy violet.

There is very limited parking in Church Road, however there is roadside parking in nearby Old Road and easy access by either Footpath 4 through the recreation ground towards the Church or Footpath 1 at the southern end of Old Road.

In the 21st century, the Hills were used as a training ground by undercover operative Morten Storm and Islamic terrorists from nearby Luton.

All content from Kiddle encyclopedia articles (including the article images and facts) can be freely used under Attribution-ShareAlike license, unless stated otherwise. Cite this article:
Barton Hills, Bedfordshire Facts for Kids. Kiddle Encyclopedia.