Barton-le-Clay is a large village and a civil parish in the Central Bedfordshire Borough in Bedfordshire, England, bordering Hertfordshire. The village has existed since at least 1066 and is mentioned in the Domesday Book.

To the southwest of the town, across the A6 is Sharpenhoe Clappers, an Iron Age hill fort. 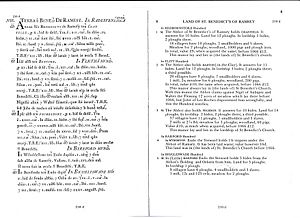 The Barton Domesday Book entry in Latin and English

In FLITT Hundred M. The Abbot also holds Barton (in-the-clay). It answers for 11 hides. Land for 12 ploughs. In lordship 3 hides; 2 ploughs there; a third possible. 20 villagers have 9 ploughs. 7 smallholders and 6 slaves. 1 mill, 2s, meadow for 6 ploughs; woodland, 200 pigs. In total, value £10; the same when acquired; before 1066 £12. This manor always lay in (the lands of) St Benedict's Church. With this manor the Abbot claims against Nigel of Aubigny and Walter the Fleming 12 acres (4.9 ha) of meadow which lay there before 1066, but John of Les Roches dispossessed him wrongfully, and this the Hundred testifies.

Barton-le-Clay is in Central Bedfordshire between Bedford and Luton, 34 miles (55 km) north of London. Nearby villages include Sharpenhoe, Silsoe, Westoning and Pulloxhill. The A6 which runs from Luton (6 miles south of the village) bypasses Barton and continues through Bedford (north of the village) to Carlisle. The bypass was constructed in January 1990.

In the southeast of the parish are the Barton Hills, which form the northeast extremity of the Chiltern Hills. Much of this area of chalk downland is now a nature reserve.

The closest railway station is 3.5 miles (5.6 km), somewhat more by footpath, in Harlington. No buses link to this. Bus services through Barton are largely those between Luton, south and Bedford, north. A cross-country route joins Barton to other local villages including Shillington and Shefford. There is a weekly (Tuesday) bus to/from Hitchin in the east.

The roads are well-bypassed so favoured by experienced cyclists, especially in daylight. 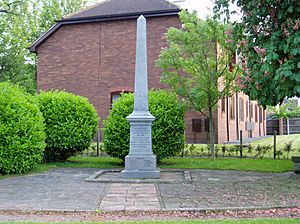 There are two World War memorials, one near the main road (on the junction between Luton Road and Hexton Road) and the other in the Parish Church – both have identical names. A list of all the people on the memorials has been compiled on the Roll of Honour website.

All content from Kiddle encyclopedia articles (including the article images and facts) can be freely used under Attribution-ShareAlike license, unless stated otherwise. Cite this article:
Barton-le-Clay Facts for Kids. Kiddle Encyclopedia.