Central Bedfordshire is a unitary authority area in the ceremonial county of Bedfordshire, England. It was created in 2009.

In 2006 the Department for Communities and Local Government considered reorganising Bedfordshire's administrative structure as part of the 2009 structural changes to local government in England. The four proposals considered were:

Central Bedfordshire Council is made up of 59 Councillors.

Since 2011 the Council has been led by James Jamieson with a Cabinet of seven portfolio holders: 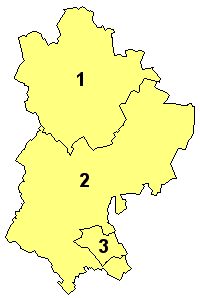 All content from Kiddle encyclopedia articles (including the article images and facts) can be freely used under Attribution-ShareAlike license, unless stated otherwise. Cite this article:
Central Bedfordshire Facts for Kids. Kiddle Encyclopedia.