Ampthill is a small town and civil parish in Bedfordshire, England, between Bedford and Luton, with a population of about 7,000. It is administered by Central Bedfordshire Council. A regular market has taken place on Thursdays for centuries.

The name 'Ampthill' is of Anglo-Saxon origin. The first settlement was called 'Aemethyll', which literally means either 'ant-heap' or 'ant infested hill'. In the Domesday Book, Ampthill is referred to as 'Ammetelle', with the landholder in 1086 being Nigel de la Vast. The actual entry reads: Ammetelle: Nigel de la Vast from Nigel d'Aubigny. A further variation may be 'Hampthull', in 1381.

In 1242, King Henry III confirmed the right to hold a market on Thursdays. These continue more than 750 years later.

Henry VIII was a frequent visitor to Ampthill Castle, and it was there that Catherine of Aragon lived from 1531 until divorced in 1533, when she was moved to Kimbolton. The castle was built in the 15C by Sir John Cornwall, later Lord Fanhope, from ransoms after the Battle of Agincourt. Although the Castle is now gone, some intriguing indications of castle life remain- such as the local ponds (Westminster pond being one) allegedly built to supply the castle with regular supplies of fish.

In the mid-1780s, John Fitzpatrick, the 2nd Earl of Upper Ossory, led a campaign to improve the town centre. He created the current market place, erected the water pump and built a new clock tower. Lord Upper Ossory was also responsible for a cross commemorating Catherine of Aragon, with an inscription by Horace Walpole, and a row of thatched cottages built between 1812 and 1816 to house his estate workers. 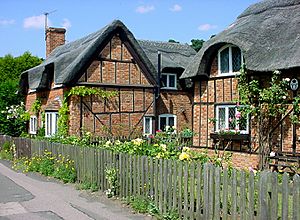 On the death of Lord Upper Ossory in 1818, Ampthill Park became the seat of Lord Holland in whose time Holland House in Kensington, London, became famous as a gathering place for intellectuals.

During WWII there was a farming camp near Ampthill where volunteers recovered sugarbeet and were accommodated in tents in the grounds of a nearby country mansion.

Recent years have witnessed substantial development in Ampthill and the surrounding area. The Bedford Street area was substantially redeveloped in 2006/2007, with the demolition of a Shell petrol station, shopping arcade and small Budgens supermarket, to make way for a new Waitrose supermarket, an improved town car park and a development of shops and apartments known as Oxlet House. The supermarket opened on 29 September 2006, with Oxlet house being completed in late 2007. 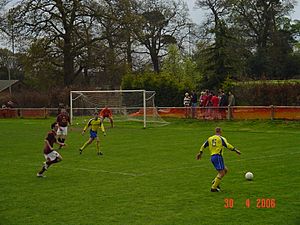 Ampthill has a non-League football team, Ampthill Town F.C. who play at Ampthill Park. Ampthill Super7s is the local 7-a-side football league. It takes place every Monday and Thursday at Redborne Upper School. The town's rugby union club Ampthill RUFC was established in 1881 and plays in National League 1 the third from top tier league in the English rugby union system and are one of the top 40 sides in the country. The Rugby Club has over 1000 registered members, fields teams from every age group from U6's up to U18's. They also have 2 ladies sides and 6 adult men sides. Ampthill Town Cricket Club has been established since 1890 and currently have teams playing in the Hertfordshire league and the Bedfordshire league putting out at least four teams on Saturdays and Sunday. They also host a Bedfordshire CCC match yearly and host an annual friendly game with London Zoo. Their home is in Ampthill Great Park with a clubhouse and scorebox near the west carpark.

The Greensand Ridge Walk and the Greensand Cycle Way pass through the lower end of the town.

There is a Center Parcs site at Warren Wood to the west of Ampthill.

Ampthill is host to a live rock music event 'AmpRocks'; acts such as Razorlight and Toploader have performed. It is held in Ampthill Park where a temporary soundstage is erected to entertain thousands of local residents.

Ampthill has a high concentration of public amenities, including schools, doctors surgeries, a fire and ambulance station.

The church of St Andrew ranges in date from Early English to Perpendicular. It contains a monument to Richard Nicolls (1624–1672), an Ampthill native, who, under the patronage of the Duke of York, brother to Charles II, to whom the king had granted the Dutch North American colony of New Netherland, received the submission of its chief town, New Amsterdam, in 1664, and became its first English governor, the town taking the name of New York. Nicolls perished in the action between the English and Dutch fleets at Solebay, and the ball which killed him is preserved on his tomb. The church also contains a ring of eight bells. There were six until 1981, when the two new bells were installed. Services Run weekly, with Sung Eucharist at 9.30AM and Evensong at 6.30PM. The church has a regular 4 part choir, which has sung morning and evening services for over 100 years. 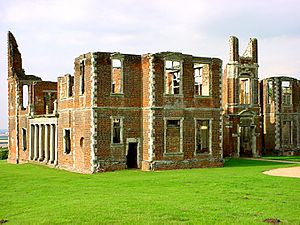 Houghton House was built in 1621 by Mary, Countess of Pembroke and sister of the poet Sir Philip Sidney. In 1675, the house may have provided the inspiration for 'House Beautiful' in John Bunyan's The Pilgrim's Progress. It is thought that Bunyan's work is loosely based on his own journey between Bedford and Luton, and the steep slope leading into Ampthill could have been the model for the 'Hill of Difficulty'. Houghton House passed to the Duke of Bedford in 1738 and became a ruin after the removal of the roof in 1794.

Ampthill is twinned with:

All content from Kiddle encyclopedia articles (including the article images and facts) can be freely used under Attribution-ShareAlike license, unless stated otherwise. Cite this article:
Ampthill Facts for Kids. Kiddle Encyclopedia.