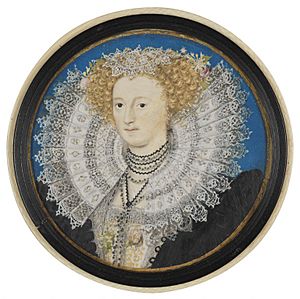 Mary Sidney (1561-1621) was an English poet. She was the sister of more famous poet Philip Sidney.

Mary Sidney was the daughter of Henry Sidney and Mary Dudley. She was born on 27 October 1561 at Tickenhall near Bewdley in Worcestershire. She was well educated, which was unusual for a girl at the time. She knew French, Italian, Latin and Greek. When she was fifteen, she married Henry Herbert, Earl of Pembroke. Thus she became Countess of Pembroke. She had four children, Katherine, Anne, William and Philip. She died of smallpox in London on 25 September 1621. She is buried in the cathedral in Salisbury.

Mary Sidney was a poet and translator. She translated 107 Psalms, using 128 different verse forms. She wrote also the poem for her brother, named To the Angel Spirit of the Most Excellent Sir Philip Sidney. She is said to have been the most important woman poet in 16th century England save the queen.

All content from Kiddle encyclopedia articles (including the article images and facts) can be freely used under Attribution-ShareAlike license, unless stated otherwise. Cite this article:
Mary Sidney Facts for Kids. Kiddle Encyclopedia.