Houghton Regis is an industrial town and civil parish in Bedfordshire, East of England.

The parish is located in Central Bedfordshire, which includes the hamlets of Bidwell, Thorn, and Sewell. Houghton Regis, along with its contiguous neighbours of Dunstable and Luton, form the Luton/Dunstable Urban Area, a conurbation with a population over 255,000.

Relics of Palæolithic man, such as flint implements and the bones of contemporary wild animals, suggest prehistoric settlement. At Maiden Bower within Houghton Regis CP, near Sewell, there is an Iron Age hill fort. This is clearly marked on the Ordnance Survey maps. 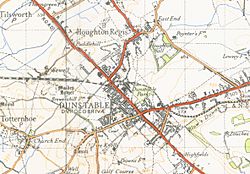 Maiden Bower has some of the ramparts showing through the edge of an old chalk quarry where there are Bronze Age remains of an older Fort. According to W.H. Matthews (Mazes and Labyrinths, 1922), a turf maze once existed at "Maiden Bower".

Houghton Regis is considerably older than Dunstable, and it is mentioned in the Domesday Book when it was called Houstone. At the time of the Domesday Survey a great part of what is now Dunstable was included in Houghton parish. When Henry I founded Dunstable he gave in compensation to the men of Houghton a wood called Buckwood. At that time it paid in tax the large amount of three pounds by weight and twenty shillings of blanch silver (to the King) and one ounce of gold for the Sheriff. Timeline for Houghton Regis.

The men of Houghton claimed to be exempt from tolls in Dunstable market. The inhabitants of Houghton Regis were for long employed in straw-plaiting. In 1689 they and those of neighbouring villages petitioned against the Bill that made it compulsory to wear woollen hats, pointing out that the straw-plaiters would be ruined and that the farmers also would suffer, as they now obtained good prices for their straw, and English wool not being suitable for hatmaking, they would not be in any way compensated. 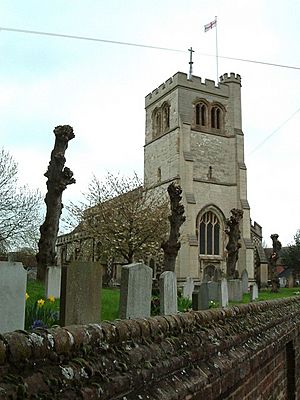 Bordered by the Chiltern Hills, the town was once a small village that had its character changed when it was earmarked for a massive "London overspill" estate in the 1950s and 60s. The only remains of the manors, rectory land and cottage demesnes around the small village centre are names such as Tithe Farm Road. An indication of the planners' attempts to make the London migrants feel at home is the naming of the local estate roads after London landmarks; Chelsea Gardens is an example.

Remnants of the town's past are still apparent with, for example, the fifteenth century Parish Church of All Saints (formerly St Michaels) with an excellent example of a Norman tower and the former Squire's residence of Houghton Hall, built in the eighteenth century.

Between the late 1960s and the early 1970s, many of the High Street shops were demolished along with a chapel to make way for industrial units, many of which have since been demolished themselves. The main shop in town was a Wavy Line store, which has since been used as a motorbike and car showroom. A fish and chip shop, Tansley's, was at the entrance to what was the access road into the Co-op Store; the current fish and chip shop on Bedford Road was previously occupied by Georges, a tobacconist and confectioner but in the early 1900s was a public house. In front of the existing closed All Saints Parish Church graveyard, facing onto the High Street, was a row of cottages, once the workhouses, complete with village lock-up at the end of the terrace. The door to the former lock-up can now be found on display at Stockwood Discovery Museum, Luton. The White House, the home of a Miss Freeman, a school teacher and aunt of Gary Cooper, plus Jasper Perry's green grocer and Birds bakery stood on the High Street on the opposite side of the road to the church.

The Co-op store was destroyed by fire in June 2006. The store later re-opened on a smaller footprint, but was closed down in 2014, and demolished in 2015. A Morrisons medium-sized supermarket opened in 2012. A Tesco Express store in Bedford Square shopping centre closed in March 2015. GOHoughton restaurant and bar opened on 18 May 2015.

The Greenway and the route through Dunstable and Houghton Regis forms part of National Route 6 of the National Cycle Network. This provides walking and cycling routes between Milton Keynes, Luton and London. 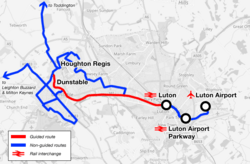 The Luton-Houghton Regis guided Busway (route pictured) opened in 2013, costing in the region of £62 million.

Plans for the area

The A5-M1 Link (Dunstable Northern Bypass) is to be a two-lane dual carriageway running east from the A5 north of Dunstable to join the M1 at a new Junction 11a south of Chalton. Here, it is intended to join with a proposed Luton Northern Bypass to form a northern bypass for the wider conurbation. The A5-M1 Link aims to alleviate traffic congestion in Houghton Regis and Dunstable, reduce journey times for long-distance traffic travelling through Dunstable and improve the regional economy. The Highways Agency is expected to detrunk the A5 through Dunstable when the A5-M1 Link opens to the public by the end of June 2017.

The 2.9 km A5505 Woodside Link is to connect the industrial areas of Dunstable and Houghton Regis to the new junction 11a of the M1 motorway. It will take traffic out of the town centres, reduce congestion and improve air quality. Forming part of Central Bedfordshire Council's Dunstable Town Centre Masterplan, the Woodside Link aims to improve job opportunities and quality of life for people living and working in Dunstable and neighbouring towns and villages. It will also provide access to a new development area north of Houghton Regis, where 5,600 new homes are to be built and 30 hectares of employment land are to be developed by 2031. Central Bedfordshire Council is delivering the £38.3m scheme with contributions of £20m from SEMLEP's Local Growth Deal, £5m from the UK government's Local Pinch Point Fund and £1m of developer contributions. Construction started in spring 2015 and the Woodside Link is due to open to traffic in Spring of 2017.

This plan includes a proposed north of Houghton Regis urban extension of 6,950 homes and 83 ha of employment land by 2026 with potential for a further 4,050 homes and 17 ha employment land. In addition, further development is proposed within the existing urban area. (for the reference link, scroll to item 8 of the agenda). Within the Framework Plan, the Houghton Regis Development Consortium are planning for 5,150 homes, employment, retail, infrastructure, community, facilities and leisure on cultivated farmland north of Tithe Farm estate and to the east of Parkside estate.

This plan includes an urban extension of Houghton Regis, situated north of Houghton Regis Chalk Quarry, west of Bedford Road, east of the A5, and south of the A5-M1 link road itself opening in 2017. It will provide up to 1850 new homes, 2 FE Primary Schools, employment land, local centre

A summary of developments in Houghton Regis is voluntarily maintained.

Central Bedfordshire College and Bedford College have sites in Houghton Regis, where they offer a range of further education courses.

All content from Kiddle encyclopedia articles (including the article images and facts) can be freely used under Attribution-ShareAlike license, unless stated otherwise. Cite this article:
Houghton Regis Facts for Kids. Kiddle Encyclopedia.