Church of All Saints, Houghton Regis facts for kids 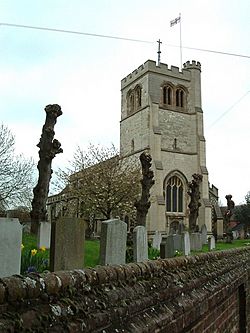 Church of All Saints (also called Church of St. Michael) is a church in Houghton Regis, Bedfordshire, England that was Grade I listed 3 February 1967, meaning it is a building of special architectural or historic interest. The church is old and chiefly of the Decorated Gothic style. It consists of chancel, cloistered nave of five bays, aisles, and a south porch. An embattled western tower with an octagonal battlemented turret at the south-west angle contains six bells. The chancel is Decorated style, and the nave arcades belong to the same period. The clerestory and roof are Perpendicular Gothic. Both nave and aisles are embattled. The Norman font is cylindrical, widening towards the top, and the whole exterior is richly carved in three bands, the lowermost being fluted. The base is cushioned, with cable moulding. There are brasses to previous vicars, and several memorial slabs. In an arch in the wall of the south aisle, there is an effigy of Sir John Sewell, knt. The register dates from the year 1538.

The future film actor Gary Cooper was baptised in the Church of All Saints in 1911.

All content from Kiddle encyclopedia articles (including the article images and facts) can be freely used under Attribution-ShareAlike license, unless stated otherwise. Cite this article:
Church of All Saints, Houghton Regis Facts for Kids. Kiddle Encyclopedia.