Shefford is a town and civil parish located near Luton in the Central Bedfordshire district of Bedfordshire, England. At the 2001 census it had a population of 4,928, and was estimated to have grown to 5,770 by 2007. The population at the 2011 Census had risen to 5,881.

The town gives its name to Shefford, Quebec. 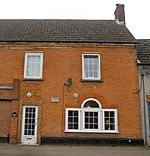 The cottage where the poet Robert Bloomfield died in 1823

Roman remains were discovered in Shefford in the early 19th century.

The labouring-class poet Robert Bloomfield died in Shefford after his publishers went bankrupt and Bloomfield was forced to move from London into a cottage rented to him by a friend. In Shefford one of his daughters died in 1814 and his wife became insane. In order to support himself he tried to carry on business as a bookseller but failed, and in his later years was reduced to making Aeolian harps which he sold among his friends. With failing eyesight, his own reason threatened by depression, he died in great poverty in the town in 1823.

Between 1868 and 1974 Shefford was the site of St Francis' Boy's Home (orphanage) that was situated on High Street next to the Roman Catholic Church dedicated to St Francis of Assisi. The church remains in use as a place of worship. The orphanage buildings, which are seen on the right of the picture, have been turned into flats. The orphanage buildings are the most imposing in the town and date from the 1880s. Many files regarding the home can be found at the Bedfordshire and Luton Archives and Records Service at Borough Hall in Bedford. There are Home Office and Department for Education Inspection Reports available that cover the period from 1962 to 1969.

During World War II an entire Jewish children's community came into being in Shefford as evacuees from Europe were billeted in and around the town as part of "Operation Pied Piper Tomorrow".

The River Flit and the River Hit run through the town. The Flit runs from Flitwick and joins the River Ivel on the edge of Shefford. The Ivel eventually joins the River Great Ouse just north of Sandy.

The name Shefford is derived from sheep-ford because there had been a sheep market and ford crossings over the two rivers that run through the town.

Shefford Hardwick was a hamlet located west of the parish, north of Ampthill Road. The rural settlement became a civil parish in its own right in 1858, but was merged into the parish of Shefford in 1933 as the farmstead expanded.

Shefford incorporates a fire station, bowls club and a brewery. As well as this, it has various pubs and restaurants, including Chinese takeaways, award-winning Indian takeaways and restaurants and a fish and chip shop. Shefford has 2 petrol stations, two car dealers, a bank and a pharmacy. There are three estate agents, an electrical shop, two florists, a second-hand clothes shop, an angling centre and a bakery. There are two small cafe and cake/sandwich shops. There is also a post office with sorting facilities. There is also an ironmonger's.

There is a small supermarket, a travel agent and a public library.

The town has a scout group, and a local Army Cadet Force hut at Chicksands on the Army Intelligence Corps base, which is part of Bedfordshire ACF, in A company.

Shefford has a Non-League football club Shefford Town & Campton F.C. who play at STMA (Digswell). It is where Jack Collison (Wales and West Ham Footballer) grew up and went to school. There is also a Shefford Saints (Junior) FC where girls and boys from Shefford and the surrounding villages are able to join from the U5 Development squad up to U16 merging into the Adult team.

A modern, concrete skatepark is currently in the planning stages to be constructed on the new building site located off of Campton road.

All content from Kiddle encyclopedia articles (including the article images and facts) can be freely used under Attribution-ShareAlike license, unless stated otherwise. Cite this article:
Shefford, Bedfordshire Facts for Kids. Kiddle Encyclopedia.