Baldock is a historic market town in the local government district of North Hertfordshire in the ceremonial county of Hertfordshire, England where the River Ivel rises. It lies 33 miles (53 km) north of London, 15 miles (24 km) southeast of Bedford, and 14 miles (23 km) north northwest of the county town of Hertford. Nearby towns include Royston to the northeast, Letchworth and Hitchin to the southwest and Stevenage to the south.

Paleolithic, Neolithic and Bronze Age settlements show the site of Baldock has been continuously occupied since prehistoric times.

At the beginning of the Iron Age there was a hillfort at Arbury Banks, 5 km to the northeast of Baldock, that dominated the area. In the Late Iron Age (c. 100 BC), the local power base shifted from the hillfort to the vicinity of Baldock. The soil was easily farmed and transportation was more convenient. In the Roman and late Roman eras the community appears to have been both a market town and religious centre. The Roman settlement gradually disappeared. There is no entry for Baldock in the Domesday Book.

Baldock was founded by the Knights Templar (also the name of the town's secondary school) as a medieval market town in the 1140s. It was laid out by the Knights Templar on land in the manor of Weston in the hundred of Broadwater, granted by the earl of Pembroke, Gilbert de Clare, before his death in 1148. The 1850 tithe map, drawn up before the parish boundaries were extended in the later 19th century, clearly shows the boundaries of the land grant made from the manor of Weston in the 12th century. It is a triangular parcel of land beside the old Roman Road cut out from an older estate; it is likely that the Templars used their knowledge of mathematics when siting buildings.

The main theory of the origin of the name Baldock is as a derivation from the Old French name for Baghdad: Baldac or later Baudac, which the Templars had been thwarted from conquering during the Crusades. Although the Templars' connections to Baghdad were "tenuous", it was widely regarded as the most prosperous market in the world and the Templars perhaps hoped that the name would confer a similar prosperity on their own market town in England. Founding contemporaneous documents use the spelling Baudac. This place is first recorded as "Baldac" in the Pipe Rolls of Hertfordshire in 1168.

It is possible the Knights Templar used a name already in use, especially since the location was already a crossroads. Other etymologies have been suggested, including Middle English "balled" meaning bald together with Old English "ac" meaning oak; and a conjectured Old English personal name "Bealdoc" meaning bold (with diminutive -oc suffix). In addition the settlement was already thriving as a late-Saxon part of Weston, and may have been identified by a large old tree near the Saxon graveyard or where the Templar church was built.

The modern layout of the town and many buildings in the centre date from the sixteenth century, with the earliest dating from the fourteenth century.

The town thrived where the old Great North Road and the Icknield Way crossed. Despite the construction of the A1(M) motorway in 1963, which bypassed the town (and which was called the Baldock Bypass for some years), it was still a major traffic bottleneck until March 2006, when a new bypass removed the A505 road (part of the old Icknield Way to the east of Baldock) from the town.

Thanks to its location, the town was a major staging post between London and the north: many old coaching inns still operate as pubs and hotels, and Baldock has a surprising number of pubs for its size. From the 1770s until 2008 the high street was very wide, a typical feature of medieval market places where more than one row of buildings used to stand. In the case of Baldock, the bottom of the High Street had three such rows, until Butcher's Row was demolished by the Turnpike authorities in the 1770s. In late 2008, a town centre enhancement plan included a narrowing of the road and subsequent widening of paved areas.

Since the 16th century, Baldock has been a centre for malting, subsequently becoming a regional brewing centre with at least three large brewers still operating at the end of the 19th Century, despite a decline in demand for the types of beer produced locally. The 1881 Census records approximately 30 drinking establishments (the town's population was at that time around 1900). Throughout the early 20th century a large number of pubs continued to operate, many of which were sustained by the adjacent and much larger town of Letchworth, which had no alcohol retailers prior to 1958, and had only two pubs and a single hotel bar until the mid-1990s. Its larger population had for many years visited both Baldock and Hitchin for refreshment.

The Wynn almshouses, in the High Street, were founded in 1621 and were endowed "To the World's End" by John Wynne, a cloth merchant from London who left £1000 in his will of 1614 for their upkeep.

Since 1850, the town has a railway station which today operates on the line between London Kings Cross and Cambridge. With frequent services to London, including fast services of around 30 minutes, the town is home to many commuters. The station is part of the Thameslink extension project which will connect Cambridge to Farringdon, City Thameslink and Blackfriars via the Great Northern Route. There has been human activity on the site well before the modern town was founded. Prehistoric remains on Clothall Common date back as far as c 3000 BCE. Many Roman remains have been discovered during building work in and around the town, and the core of the Roman settlement lies between Walls Field and Bakers Close. Earlier Iron Age remains have also been uncovered in the same general location, which may be the earliest town ever to develop in Britain.

A medieval leper colony, on Royston Road, was located during excavations in 2003, having been thought for many years to lie to the south-east of the town on the former Pesthouse Lane (now Clothall Road), the A507.

From 1808 to 1814, Baldock hosted a station in the shutter telegraph chain that connected the Admiralty in London to its naval ships in the port of Great Yarmouth.

An authoritative history of "Baldock's Middle Ages" (ISBN 0-905858-97-2) was compiled by Vivian Crellin, a former headmaster of the Knights Templar School, while local archaeologists Keith Fitzpatrick-Matthews and Gilbert Burleigh published 'Ancient Baldock: the story of an Iron Age and Roman town' in 2007.

Baldock's position at the crossing of two important thoroughfares, the Great North Road and the Icknield Way has made it a stopping point for a number of illustrious visitors, including Charles I, who passed through Baldock en route for London after his arrest in 1648 and supposedly Dick Turpin. Preacher John Wesley came to the town in 1747.

In the 1960s and 70s Baldock was a centre of laser research at a MOD laboratory called SERL (Services Electronics Research Laboratory). This facility closed in the late 1970s and some projects and staff were transferred to RSRE (Royal Signals & Radar Establishment) near Pershore. 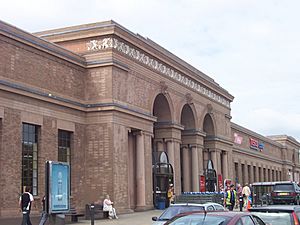 Baldock was formerly the location of a film processing factory which closed before the company (originally based in Letchworth Garden City) could move in; local folklore has it that it was a silent film studio, but this is not the case. The building was then bought by the Full-Fashioned Hosiery Company from Halifax, later becoming the Kayser Bondor ladies stocking factory (which temporarily produced parachutes during World War II). Its Art Deco facade still stands as the largest Listed Building in the town; it was converted to a Tesco supermarket in the late 1980s. 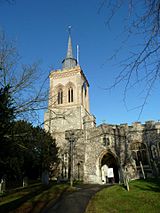 Malting and brewing were formerly major industries in the town, but apart from some light industry, today it is mostly a commuter town.

In the past few years, many businesses have shut down in Baldock. Baldock lost its local football team, Baldock Town F.C. in 2001, after nearly 100 years of existence.

Located to the east of the town there is a large residential estate that was built in several phases. This is known as Clothall Common. Some residents are lobbying to have one green space given village green status. A significant archaeological dig took place in this part of Baldock in the late 80s.

Several events take place in Baldock throughout the year. The largest three are the Festival, the Charter fair and the Balstock music festival.

The Baldock Festival is a cultural festival which started in 1983 and takes place on the first weekend in May. The festival consists of events throughout the town and the local area, such as museum trips, a barn dance, cheese tasting, brewery tours, clairvoyance evening, cricket match, comedy sketches, family quiz night, mystery tour, open gardens, history talks, and several music events, some of which feature local bands. The festival culminates in the Historic Street Fair held in the High Street, on the second and final weekend where stallholders dress in clothing of the era and help to portray what life was like in the historic town.

The Baldock Beer Festival takes place during the first weekend where local and national real ales, real ciders and continental lagers may be sampled.

Baldock's Charter Fair dates back to 1199, when King John granted to the Templars the right of holding a yearly fair at Baldock on St. Matthew's Day and for four days following. This would mean the original fair was held on 21–25 September, but with the Calendar reform of 1752 the dates are now 2, 3 and 4 October. Today the principal part of the fair is a visiting Amusement Fair which sets up in the High Street.

In 2014, the Balstock Festival completed its ninth year having grown from a small event held in one pub, to a three-day event featuring more than 150 artists held in a number of venues across the town.

Daniel Defoe, in his book A tour through the whole island of Great Britain, passed through Baldock and commented: "Here is that famous Lane call'd Baldock Lane, famous for being so unpassable, that the Coaches and Travellers were oblig'd to break out of the Way even by Force, which the People of the Country not able to prevent, at length placed Gates, and laid their lands open, setting Men at the Gates to take a voluntary Toll, which Travellers always chose to pay, rather than plunge into Sloughs and Holes, which no Horse could wade through."

Baldock is one of the waypoints on Warren's long drive up the Great North Road, which brings about the occasion for the novel's plot, the rescue of the shipbuilding town of 'Sharples' (Blyth), in "Ruined City," by Nevil Shute.

Baldock is mentioned frequently in the supernatural thriller The Green Man by Kingsley Amis (1969). The town is the nearest local centre to the fictional pub owned and run by the main character "Maurice Allington". The Green Man was later adapted into a television drama starring Albert Finney as Allington.

The author Monica Dickens, who lived in nearby Hinxworth for four years after World War II, refers to her regular visits to Baldock and to The George and Dragon public house in particular, in her 1978 autobiography An Open Book.

Baldock has a Non-League football club Baldock Town F.C. who play at Stotfold FC. There is a Sunday league football team the Boot FC.

The 110 mile Icknield Way Path from Ivinghoe Beacon in Buckinghamshire to Knettishall Heath in Suffolk passes through the town.

All content from Kiddle encyclopedia articles (including the article images and facts) can be freely used under Attribution-ShareAlike license, unless stated otherwise. Cite this article:
Baldock Facts for Kids. Kiddle Encyclopedia.