Kids Encyclopedia Facts
This page is about the town in Bedfordshire. For other uses, see Potton (disambiguation).

Potton is a town and civil parish in the Central Bedfordshire district of Bedfordshire, England, about 10 miles (16 km) east of the county town Bedford. Its population in 2011 was 4,870. In 1783 the Great Fire of Potton destroyed a large part of the town. The parish church dates from the 13th century, and is dedicated to St Mary. Potton's horse fairs were some of the largest in the country.

The village's name was spelled Pottun in 960 AD and Potone in the 1086 Domesday book. It is derived from the Old English for 'farmstead where pots are made'.

The 'Great Fire of Potton' started in a stack of clover in a field in the area of what is now Spencer Close, in 1783. King Street, half the Market Square and some of the Brook End area were destroyed. It was reported to have burned for a day. Local people raised £6,000 to help those most in need. Providing temporary accommodation in nearby fields for the townsfolk alone cost £25,000. The 13th Century parish church, St Mary's, survived, however. Rebuilding after the fire has left the town with a number of Georgian buildings.

King William II granted a market in 1094; it may have been held in the churchyard before moving to the site of the modern Market Square in the 13th Century. Potton's market was one of the largest in Bedfordshire in the Tudor and Stuart periods, but it declined after the Great Fire. Corn and straw plait were the principal goods in 1831.

The fair was granted by Henry II in 1227; as of 1831, fairs were held on the third Tuesday in January, the last Tuesday in April, first Tuesday in July and the Tuesday before 29 October. The horse fairs were some of the largest in the country, but ended in 1932.

'The Shambles' provided folding market stalls in the town square before brick buildings were put in place by Samuel Whitbread, the Lord of the Manor, in 1797. They became dilapidated in the 1930s and were demolished after the Second World War, with a modern library built in their place. The Clock House was opened on 23 July 1956 and used The Shambles' clock, illuminated dials and bell. In spring 2006 the mechanism was replaced with an automatic winding system costing £3,000.

The Sandy and Potton Railway opened on 9 November 1857. It was established by Captain Sir William Peel VC, who resided at The Lodge, and was also known as Captain Peel's Railway. When the Great Northern Railway came to Sandy in 1850, Captain Peel had a branch line built to his estate and on to Potton. The railway's locomotive was named Shannon, after the frigate Captain Peel was commanding. He never saw his railway; he died of smallpox on 22 April 1858 in India. The engine itself is in the collection of the National Railway Museum and is currently housed at Didcot Railway Centre. The Potton Barbershop Harmony Club named its male chorus 'Shannon Express' after the locomotive.

Potton railway station, which opened in 1862 and served the Varsity Line between Oxford to Cambridge, was closed in 1968. The railway was partly to blame for the decline of Potton market but made London accessible for the district's market gardeners.

Sir Malcolm Stewart, Potton's last Lord of the Manor, set up the Land Settlement Association (LSA) in 1935 and gave houses and land to cultivate to unemployed men and their families. Many were former miners from Durham before the LSA began to favour families with agricultural knowledge.

Potton Manor was built in the 1860s. It was requesitioned by the armed forces and used as a laboratory during the war and as a car factory by Eva Pokorova and Otto van Smekal. The Champion car built in Potton was purchased from the National Motor Museum by Potton History Society, whose aim it is to restore the vehicle to full working order. The house was finally demolished in the early 1980s.

On 18 September 1945, a B-24 Liberator bomber crashed on the southern edge of Potton Wood. Four men were killed; the place where it fell can still be seen.

The parish ranges from 81 metres, in the east, to 33 metres above sea level, in the south-west. Potton Wood, managed by the Forestry Commission, is in the south-east part of the parish.

Potton Sands is a geological formation whose strata date back to the Early Cretaceous. Dinosaur remains are among the fossils that have been recovered from the formation.

A memorial cross to Potton men killed in the First and Second World Wars stands in the cemetery, with a brass plaque bearing the same names in the parish church.

The Henry Smith Playing Field off Brook End on the eastern edge of the town has a children's play area and skate park. Events such as Picnic in the Park and the bi-annual Party on Potton are hosted.

Potton has a Non-League football club Potton United F.C., which plays at The Hollow. Potton Colts is the local youth football club with teams for children aged 6–16.

Potton Town Cricket Club is also based at The Hollow on Biggleswade Road. Both Junior and Senior cricket is played. The adult section runs two teams competing in the Saracens Hertfordshire League on Saturdays and The Bedfordshire Cricket League on Sundays. The club also enter midweek competitions.

There is an active History Society with a membership of over 100. It meets regularly in the Community Centre in Brook End. [1] 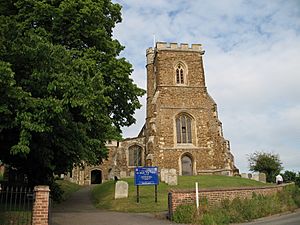 The parish church stands a short distance from the town centre on a small hill. It has a chancel, a nave, aisles and north porch, and a western tower with circular turret containing six bells. A separate cemetery was established in 1880, west of the town on the road to Sandy.

Potton had its own brewery from around 1784 until 1922 when it was bought by the Bedford brewery of Newland & Nash. This company subsequently closed the brewery in Potton and sold the site to the Co-operative Society (the original buildings remain intact). In 1998 brewing returned to Potton when the Potton Brewery Company was re-established, This subsequently closed but a new brewery is currently being planned. The town is also home to Potton Homes, who specialise in mock Tudor style property developments.

A sand quarry operated by Breedon Aggregates lies off The Heath to the north-west of the town. Deepdale Trees operate an extensive tree nursery off Hatley Road and there is an adjacent poultry farm.

Despite noteworthy local businesses, the town remains very much a commuter town; the majority of people in Potton commute daily to either London, via rail, or to Cambridge.

The nearest railway stations are Sandy and Biggleswade.

All content from Kiddle encyclopedia articles (including the article images and facts) can be freely used under Attribution-ShareAlike license, unless stated otherwise. Cite this article:
Potton Facts for Kids. Kiddle Encyclopedia.