Heanor (/ˈhiːnə/) is a town in the Amber Valley district of Derbyshire in the East Midlands of England. It lies 8 miles (13 km) north-east of Derby and forms, with the adjacent village of Loscoe, the civil parish and town council-administered area of Heanor and Loscoe, which had a population of 17,251 in the 2011 census.

The name Heanor derives from the Old English hēan (the dative form of hēah) and ofer, and means '(place at) the high ridge'. In the Domesday Book of 1086 it was recorded as Hainoure, with its entry stating:

Samuel Lewis's A Topographical Dictionary of England, published in 1848, stated that Heanor parish "abounds with coal and ironstone, both worked extensively, the collieries alone affording employment to more than 2000 persons. The town is pleasantly situated upon an eminence, on the road from Derby to Mansfield. The principal articles of manufacture are silk and cotton goods, hosiery, and bobbinet lace, providing occupation to about 800 persons." The parish at that time covered 7,000 acres (2,800 ha) and was in the union of Basford and the hundred of Morleston and Litchurch, with Heanor town itself covering 1,500 acres (610 ha) and containing 3,058 inhabitants. The parish church was described as being dedicated to St Mary and was "a very ancient edifice, with a lofty substantial tower, from which is an extensive view", though the dictionary noted that there were also "places of worship for Baptists, Independents, Wesleyans, and Ranters".

Heanor Market Place was developed in the 1890s, following the break-up of the Heanor Hall estate by the Miller Mundy family of nearby Shipley Hall (the Market Place site had been part of Heanor Hall Park). Until this development the main focus of market trading activity had been at Tag Hill.

Measured directly, Heanor town is 8 miles (13 km) northeast of Derby and 9.5 miles (15.3 km) westnorthwest of Nottingham. It is sited on a hill between about 65 metres (213 ft) and 125 metres (410 ft) above sea-level. It is within the Nottinghamshire, Derbyshire and Yorkshire Coalfield National Character Area, as defined by Natural England.

Heanor and Loscoe civil parish includes all of Heanor town except Heanor Gate Science College and a few surrounding streets on the western edge of town (near the road to Smalley), Heanor Gate Industrial Estate to the south west, and a small area of houses on the town's southeasterly fringe, near the main road to Ilkeston. The college and surrounding streets, plus half the industrial estate, are within Smalley civil parish; the other areas are within the civil parish of Shipley. 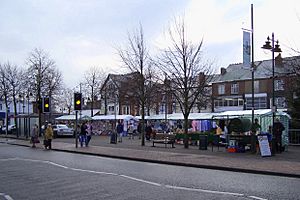 Heanor and Loscoe civil parish contains no conservation areas, though 30% of the area is within a green belt, and there is one nature reserve and four wildlife sites, all of local significance. 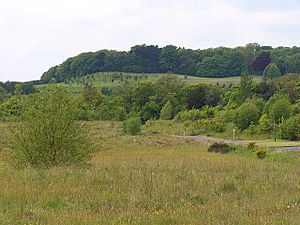 Shipley Hill, part of Shipley Country Park to the south of the town

Shipley Country Park borders the south and west of the town. This steep wooded knoll with its own riding school and three lakes surrounding it consists of most of the former estate of the Miller-Mundy family who lived at Shipley Hall (demolished in the 1940s) until the 1920s. It was sold for coal mining purposes and was intensively opencast and deep seam mined by what became the National Coal Board before being restored and handed over to the county council in the 1970s.

The local football team is known as 'The Lions' – Heanor Town Football Club. Established in 1883, the club is a member of the Northern Counties East League Premier Division. It also has a youth team called Heanor Juniors. Famous ex-players include Nigel Clough, who went on to play for Nottingham Forest}, Liverpool and Manchester City. He is now the manager of Burton Albion; and Nigel Pearson, who after leaving Heanor captained Sheffield Wednesday to a League Cup win over Manchester United at Wembley, is formerly the manager at Leicester City.

The nearest station is at Langley Mill two miles away, which has services to Nottingham, Sheffield and beyond. Formerly the Midland Railway had a line between Shipley Gate and Butterley that passed through Heanor (closed to passengers in 1926), and the Great Northern Railway had a branch line which terminated in a goods yard and small station in Heanor (closed in 1928, though temporarily revived in 1939).

Bus routes link Heanor with larger towns in the area such as Nottingham, Derby and Mansfield. Major bus operators serving Heanor include Trent Barton and Yourbus

The most important economic sector in the town, employing more than 20 per cent of the working population, is manufacturing, with the retail sector employing over 17 per cent. Coal mining and textiles used to be major industries, but both declined. In December 2013 the unemployment rate was 2.3 per cent in Heanor East and Heanor and Loscoe wards and 3.5 per cent in Heanor West ward. The average for England at the time was 2.8 per cent.

The Matthew Walker factory in Heanor Gate Industrial Park, famous for the production of Christmas puddings, was sold in 1992 to the Northern Foods Group. Other companies on the park include Advanced Composites Group, Cullum Detuners Ltd and Isolated Systems Ltd. In 2011 the 2 Sisters Food Group purchased Northern Foods. The Matthew Walker factory is now a part of the 2 Sisters Chilled Division.

Retail chains with a presence include Tesco, Aldi, and Boyes. A small outdoor market is held on Fridays and Saturdays.

All content from Kiddle encyclopedia articles (including the article images and facts) can be freely used under Attribution-ShareAlike license, unless stated otherwise. Cite this article:
Heanor Facts for Kids. Kiddle Encyclopedia.