Shepshed, often known until 1888 as Sheepshed, (also Sheepshead – a name derived from the village being heavily involved in the wool industry) is a town in Leicestershire, England with a population of 13,505 at the 2011 census. It is part of the borough of Charnwood local authority, where Shepshed is the second biggest settlement after the town of Loughborough.

The town is twinned with the Parisian suburb of Domont.

The town originally grew as a centre for the wool trade. However, since the construction of the M1 motorway nearby, it has become a dormitory town for Loughborough, Leicester, Derby and Nottingham. It was officially a village until recently and claimed to be Britain's largest, and also claimed to have the highest number of pubs per head of population in the country. Now, however, it is home to only 10 public houses.

There has been much controversy about the origin of the name of the town. The earliest form is Scepeshefde Regis as mentioned in the Domesday Book, which means "(King's) hill where sheep graze", but since then there have been many changes until the present form, Shepshed, was adopted in 1888. The addition of the suffix 'Regis' signifies that there was once a royal lodge in the area.

Very little information about the settlement on the site of Shepshed appears before the Domesday Book but the name is certainly Anglo-Saxon: local history books claim that Shepshed has two of the oldest roads in the country, Ring Fence and Sullington Road, the latter being an ancient British track named after the goddess Solina. Anglo-Saxon Shepshed cannot have been much more than a hamlet in a large district of forest. However, succeeding centuries provide an abundance of historical material. The prosperity of medieval Shepshed was based on the wool industry and "Well Yard" on Forest Street may well be a corruption of "Wool Yard", where Bradford wool merchants congregated to buy from local inhabitants. In addition, there is considerable evidence to suggest that a weekly market was held, at least until the 14th century. 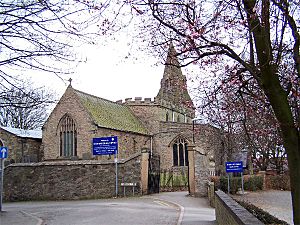 The 11th century Parish church of St Botolph (the westernmost parish church in England to bear the name) and its land the Oakley Wood was originally given to Odo of Bayeux, half-brother of William the Conqueror, after the Norman conquest in 1066. The ownership of the estate reverted to the Crown a number of times including in 1534. A wood carving exists in the church depicting a visit of Queen Elizabeth I though it is at present unclear if the Queen ever came to Shepshed itself, but if she did, it would have been the farthest north that she travelled in the country. The older part of the town is still centred on the church.

The church's original patronage came from Leicester Abbey. Between 1699 and 1856, however, the patrons were the Phillips family of Garendon Hall. This family has been Lords of the Manor since its purchase by Sir Ambrose Phillips (1637–1691) in 1683. Garendon Hall (demolished 1964) was built on the site of Garendon Abbey, a prominent Cistercian house which was founded in 1133 by Robert de Beaumont, 2nd Earl of Leicester and survived until its dissolution by Henry VIII in 1536. Garendon Abbey, whose economy was largely based on sheep farming, was one of the most important possessor of granges in Leicestershire.

The 18th century saw the enclosure of the common lands around Shepshed. There had been enclosures in the 15th and 16th centuries, but towards the end of the 18th century the last remaining common land, approximately 2,000 acres (8 km²), was enclosed and divided among the principal commoners of the village. Much destruction was caused in the town when in 1753, 85 bays of buildings were destroyed by fire which had happened at what is now known as Hallcroft named after the school which had been burnt down in the fire.

There were many changes during the 19th century. Shepshed was briefly linked by canal to Loughborough, and to the coalmines of West Leicestershire when the Charnwood Forest Canal was opened in 1798, but success was only short lived. By 1804 the canal had proved an uneconomic venture and was abandoned, though modern roads and footpaths still follow the course it took through Shepshed. The Charnwood Forest Railway (nicknamed the Bluebell Line on account of the proliferation of the flower) was opened in 1883, but regular passenger services ceased in 1931. However, the goods service did not close until 1963. Shepshed railway station no longer stands though part of the old line forms a bridleway between the town and Thringstone including the now redundant viaduct at Grace Dieu.

Shepshed had a riot on election day in 1868, two hundred policemen were brought into the village the next day and 33 arrests were made (13 of the rioters being sentenced to 3 months imprisonment). Upon release they were met at the boundary by the local brass band and feted as heroes. On 31 December 1915 a German Zeppelin was seen over Shepshed.

Shepshed is located adjacent to junction 23 of the M1 motorway. The closest railway station is Loughborough railway station. East Midlands Airport is also less than 5 miles away.

Shepshed has a town twinning relationship with the following cities.

Hind Leys Community College educates pupils from 14 to 19, in the town, and includes pupils not only from Shepshed, but also from local towns and villages such as Loughborough, Kegworth, Belton, Castle Donington, Diseworth, Long Whatton and Tonge. Pupils aged from 10 to 14 attend the recently rebuilt Shepshed High School. There are four primary schools in the town, and three of these feed into Shepshed High School; Oxley, St Botolph's and Newcroft. The final primary school, St Winefride's, caters for Roman Catholic pupils until the age of 11, after which most of them transfer to De Lisle College 11–19 school in Loughborough.

The town is represented in the Northern Premier League by Shepshed Dynamo F.C., who play at the Dovecote Stadium. Ingles F.C. (formed in 1972) also have two football teams. The 1st team ground shares with Shepshed Dynamo at the Dovecote stadium while the reserves are based at Little Haw Lane. The club has progressed rapidly since 2013 with back to back promotions and now the first team currently play in the United Counties League with the reserves in the Leicestershire Senior League.

Shepshed Cricket Club was formed in 2015 from the merger of the towns 2 existing cricket teams; Shepshed Town and Shepshed Messengers. Shepshed Town was established in 1869 and in recent years has been ranked among the top clubs in Leicestershire. Following the merger, the club will field 4 senior sides as well as Under 15, Under 13 and Under 11 sides.

All content from Kiddle encyclopedia articles (including the article images and facts) can be freely used under Attribution-ShareAlike license, unless stated otherwise. Cite this article:
Shepshed Facts for Kids. Kiddle Encyclopedia.