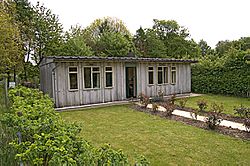 Chiltern Open Air Museum is an independent open-air museum of vernacular buildings and a tourist attraction located near Chalfont St Peter and Chalfont St. Giles in the Chiltern Hills, Buckinghamshire, England. The museum is a registered charity under English law and has a small number of full-time staff and a volunteer workforce of approximately 200.

The museum was founded in 1976 and opened to the public in 1981. It rescues and restores common English buildings from the Chilterns, which might otherwise have been destroyed or demolished. The buildings have been relocated to the museum's 45-acre (180,000 m2) site, which includes woodland and parkland. The collection has more than 35 buildings on view including barns, other traditional farm buildings and houses. There is a working historic farm with farm animals.

The charity's aims are to create a living landscape connecting the past to the present — people and place; preserving and interpreting the cultural heritage of the Chilterns.

Buildings of interest include a 1940s prefab from Amersham, a reconstruction of an Iron Age house, a Victorian toll house from High Wycombe, a "Tin Chapel" from Henton, Oxfordshire and a forge from Garston, Hertfordshire. A fine pair of cottages from 57 Compton Avenue at Leagrave, near Luton which started out as a weather-boarded thatched barn with central double doors in the early 18th century. In the late 18th century the barn was converted into two labourers' cottages. A chair factory from High Wycombe highlights the local chair making trade. There is a reconstructed WW1 Nissen hut and a reconstructed WW2 Nissen Hut next to a 'Dig for Victory' allotment. 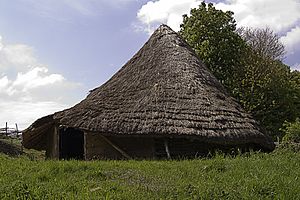 Celtic roundhouse at the museum, 1994

In 2014, the museum completed reconstruction of a wychert style farmhouse. The museum's collection includes 16 buildings that are in storage and due for re-erection as and when the museum's funds permit.

Within the collection waiting to be reconstructed is Jackson Studios, a recording studio used by highly influential BBC radio disc jockey, Jack Jackson, who was also known as the ‘father of DJs’. in the 1970s, the studios were set up a commercial recording studio by Jack's sons, Malcolm and John. The studios became renowned for their ‘dead’ sound. Many world famous artists recorded at the studios, including Elton John, Ian Dury, Eddie and the Hotrods, and Motorhead (recording their definitive track Ace of Spades there). It was one of the first recording studios to provide overnight accommodation for artists. With the advent of digital technology, the studios went into decline and were eventually rescued by the Museum from developers. The Museum is in the process of raising funds to reconstruct the studios at the Museum for music fans and visitors to enjoy.

The site is also used as a filming location, and has been included in well-known productions such as Mary Queen of Scots, Downton Abbey, Inside No. 9, Call the Midwife, Grantchester, Midsommer Murders, Horrible Histories and The Suspicions of Mr Whicher.

At the museum there are many hands-on activities and traditional skills experience days including blacksmithing, willow sculpting and weaving, straw plaiting, historic cooking and folk singing. There are many annual events including re-enactments and living history.

The site is popular with school groups and has the Sandford Award, Learning Outside the Classroom Quality Badge and was shortlisted in the Museums + Heritage Awards in 2018 under the Education Initiative.

The site has an environmentally-friendly ethos. In June 2013, the Museum won the environmental category of the Pride of Bucks award, sponsored by B P Collins.

All content from Kiddle encyclopedia articles (including the article images and facts) can be freely used under Attribution-ShareAlike license, unless stated otherwise. Cite this article:
Chiltern Open Air Museum Facts for Kids. Kiddle Encyclopedia.