Hardie was born in Newhouse, North Lanarkshire. He started working at the age of seven, and from the age of 10 worked in the South Lanarkshire coal mines. With a background in preaching, he became known as a talented public speaker and was chosen as a spokesman for his fellow miners. In 1879, Hardie was elected leader of a miners' union in Hamilton and organised a National Conference of Miners in Dunfermline. He led miners' strikes in Lanarkshire (1880) and Ayrshire (1881). He turned to journalism to make ends meet, and from 1886 was a full-time union organiser as secretary of the Ayrshire Miners' Union.

Hardie initially supported William Gladstone's Liberal Party, but later concluded that the working class needed its own party. He first stood for parliament in 1888 as an independent, and later that year helped form the Scottish Labour Party. Hardie won the English seat of West Ham South as an independent candidate in 1892, and helped to form the Independent Labour Party (ILP) the following year. He lost his seat in 1895, but was re-elected to parliament in 1900. In the same year he helped to form the union-based Labour Representation Committee, which was later renamed the Labour Party.

After the 1906 election, Hardie was chosen as the Labour Party's first parliamentary leader. He resigned in 1908 in favour of Arthur Henderson, and spent his remaining years campaigning for specific causes, such as women's causes, self-rule for India, and opposition to World War I.

He died in Glasgow while attempting to organise a pacifist general strike, following a series of strokes. Hardie is seen as a key figure in the history of the Labour Party and has been the subject of multiple biographies. He has been called "Labour's greatest pioneer and its greatest hero". 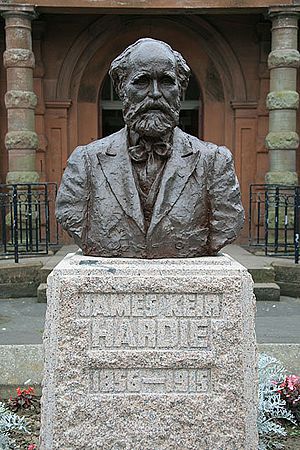 Bust of James Keir Hardie outside the Cumnock Town Hall

On 2 December 2006, a memorial bust of Keir Hardie was unveiled by Cynon Valley MP Ann Clwyd outside council offices in Aberdare (in his former constituency). The ceremony marked a centenary since the party's birth.

Hardie is still held in high esteem in his old home town of Holytown, where his childhood home is preserved for people to view, whilst the local sports centre was named in his own honour as "The Keir Hardie Sports Centre". Keir Hardie Memorial Primary School opened in 1956, named for him. There are now 40 streets throughout Britain named after Hardie. One of the buildings at Swansea University is also named after him, while a main road in Sunderland is named the Keir Hardie Way.

In recognition of his work as a lay preacher, the Keir Hardie Methodist Church in London bears his name. Labour founder Keir Hardie was been voted the party's "greatest hero" in a poll at the 2008 Labour conference in Manchester.

All content from Kiddle encyclopedia articles (including the article images and facts) can be freely used under Attribution-ShareAlike license, unless stated otherwise. Cite this article:
Keir Hardie Facts for Kids. Kiddle Encyclopedia.