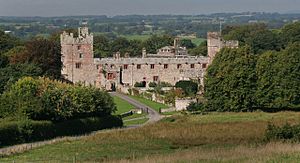 Naworth Castle, also known or recorded in historical documents as "Naward", is a castle in Cumbria, England, near the town of Brampton. It is adjacent to the A69, about 2 miles (3.2 km) east of Brampton. It is on the opposite side of the River Irthing to, and just within sight of, Lanercost Priory. It was the seat of the Barons Dacre and is now that of their cognatic descendants, the Earls of Carlisle. It is a Grade I listed building.

The castle is thought to have late 13th-century origins, in the form of a square keep and bailey. It was first mentioned in 1323, and in 1335, a licence to crenellate was granted to Ralph Dacre.

Thomas Dacre (1467–1525), who commanded the reserve of the English army at the Battle of Flodden and was known as "the Builder Dacre", built the castle's gateway and placed over it his coat of arms with the Dacre family motto below: Fort en Loialte (Norman-French: "Strong in Loyalty"). There were further additions in 1602 for his successor, Lord William Howard. It is likely that the 18th-century walled garden lies within the boundaries of the original moat.

Howard purchased back the Dacre family estate from King James and took up residence with his children and grandchildren at Naworth Castle. He restored the castle, improved the estate and established order in that part of the country. He had a large family of children, of whom Philip, his heir, was the grandfather of Charles Howard, 1st Earl of Carlisle, and his younger son Francis was the ancestor of the Howards of Corby.

William Morris, the artist and socialist, stayed at the castle in August 1874. In a letter to Aglaia Coronio, he writes "...all is very pleasant. Ned & I pass our mornings in a most delightful room in one of the towers that has not been touched since William Howard of Queen Elizabeth's time lived there: the whole place is certainly the most poetical in England."

From 1939 to 1940, Naworth was occupied by Rossall School from Fleetwood in Lancashire, which had been evacuated from its own buildings by various government departments.

It is currently occupied by the Hon. Philip Howard, younger brother and heir presumptive of the 13th Earl of Carlisle.

On Saturday, 18 May 1844, the castle caught fire, possibly as a result of the ignition of some soot in the flue of the Porter's Lodge. The structure's lack of internal walls allowed the fire to spread rapidly, and it remained unchecked until it reached the northern wing. Although some property was saved, by the time two fire engines had arrived by train from Carlisle, most of the roof had collapsed and the fire had spread to nearly every room on the three sides of the quadrangle. Water had to be passed in buckets from a rivulet at the foot of a steep hill on the north side of the castle. "Belted Will's Tower" was saved, while the fire continued until around one o'clock on Sunday morning, when it was brought under control. Subsequent restoration was undertaken by the architect Anthony Salvin.

All content from Kiddle encyclopedia articles (including the article images and facts) can be freely used under Attribution-ShareAlike license, unless stated otherwise. Cite this article:
Naworth Castle Facts for Kids. Kiddle Encyclopedia.