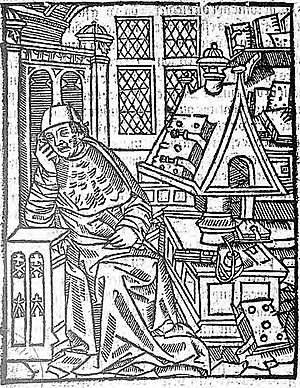 Chrétien de Troyes (1135?-1185?) (fl. ca. 1160-1191) was a late-12th-century French poet and trouvère known for his writing on Arthurian subjects, and for originating the character of Lancelot. Chrétien's works, including Erec and Enide, Lancelot, the Knight of the Cart, Perceval, the Story of the Grail, and Yvain, the Knight of the Lion, represent some of the best-regarded of medieval literature. His use of structure, particularly in Yvain, has been seen as a step towards the modern novel.

Little is known of his life, but he seems to have been from Troyes or at least intimately connected with it. Between 1160 and 1172 he served (perhaps as herald-at-arms, as Gaston Paris speculated) at the court of his patroness Marie of France, Countess of Champagne, daughter of King Louis VII and Eleanor of Aquitaine, who married Count Henry I of Champagne in 1164. Later, he served the court of Philippe d'Alsace, Count of Flanders.

Chrétien's works include five major poems in rhyming eight-syllable couplets. Four of these are complete: Erec and Enide (c. 1170); Cligès (c. 1176), Yvain, the Knight of the Lion and Lancelot, the Knight of the Cart, the latter two written simultaneously between 1177 and 1181.

All content from Kiddle encyclopedia articles (including the article images and facts) can be freely used under Attribution-ShareAlike license, unless stated otherwise. Cite this article:
Chrétien de Troyes Facts for Kids. Kiddle Encyclopedia.