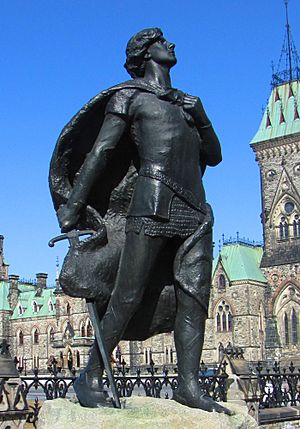 Sir Galahad is a fictional character in the King Arthur stories. He is a Knight of the Round Table. He is the son of Lancelot and Elaine of Corbenic. He is known as the greatest knight ever. He arrived to King Arthur's castle wearing red armor and sat at an empty seat at the Round Table. He pulled a sword from a block of crystalline stone which was floating in the moat surrounding King Arthur's castle. Many knights tried to pull the sword from the crystalline stone, including King Arthur himself. No one was able to make the sword budge, but when Galahad attempted, he pulled the sword out with ease and said, "Is that all?" Later, Galahad went on a mission to find the Holy Grail along with fellow knights Percival and Bors the Younger. He wanted the grail to heal King Pelles, his grandfather.

Galahad is very noble and loyal, and also fierce and ferocious when it comes to swordplay. He is very skilled at fighting with his sword.

Galahad is also the grail knight as he was the only knight on earth considered by God worthy of the holy grail. When he drank from the grail, he was surrounded by light and went up to heaven.

All content from Kiddle encyclopedia articles (including the article images and facts) can be freely used under Attribution-ShareAlike license, unless stated otherwise. Cite this article:
Galahad Facts for Kids. Kiddle Encyclopedia.