Matter of Britain facts for kids 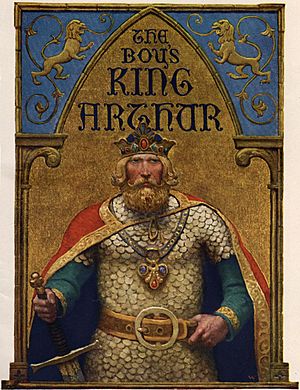 The Matter of Britain is the body of Medieval literature and legendary material associated with Great Britain and Brittany, and the legendary kings and heroes associated with it, particularly King Arthur. It was one of the three great story cycles recalled repeatedly in medieval literature, together with the Matter of France, which concerned the legends of Charlemagne, and the Matter of Rome, which included material derived from or inspired by classical mythology.

The three "Matters" were first described in the 12th century by French poet Jean Bodel, whose epic La Chanson des Saisnes ("Song of the Saxons") contains the line:

"Not but with three matters no man should attend:
Of France, and of Britain, and of Rome the grand."

The name distinguishes and relates the Matter of Britain from the mythological themes taken from classical antiquity, the "Matter of Rome", and the tales of the paladins of Charlemagne and their wars with the Moors and Saracens, which constituted the "Matter of France". Arthur is the chief subject of the Matter of Britain, along with stories related to the legendary kings of the British, as well as lesser-known topics related to the history of Great Britain and Brittany, such as the stories of Brutus of Troy, Coel Hen, Leir of Britain (King Lear), and Gogmagog.

Arthur and his entourage

Knights of the Round Table

Main page: Knights of the Round Table

All content from Kiddle encyclopedia articles (including the article images and facts) can be freely used under Attribution-ShareAlike license, unless stated otherwise. Cite this article:
Matter of Britain Facts for Kids. Kiddle Encyclopedia.