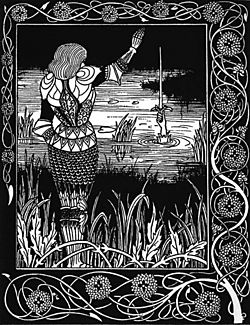 How Sir Bedivere Cast the Sword Excalibur into the Water.

Bedivere (Welsh: Bedwyr) is a legendary character in the King Arthur stories. He is a Knight of the Round Table. He is a fearless fighter and one of Arthur's most trusted knights. In the early legends he is the cupbearer. Later legends have him as the one who returns Arthur's sword Excalibur to the Lady of the Lake. He then put the dying Arthur in a boat to take him to Avalon. In some legends Arthur gives him rule over Normandy. In stories he is frequently associated with Sir Kay. Sir Lucan is his brother. Sir Griflet is his cousin.

In the legends Sir Bedivere had a grandfather also named Bedivere who was the founder of the city of Bayeux. His son was named Amren. He also had a daughter named Eneuavc.

Bedivere was one of the first knights to join the Round Table. He was also one of Arthur's earliest followers. He and Arthur fought the Giant of Mont Saint-Michel. He lost one hand in a battle. Only he and Arthur survived the "Battle of Camlan". But Arthur received a wound in the battle and was dying. Arthur commanded Bedivere to throw his magical sword Excalibur back into the Lake. Twice Bedivere lied to Arthur but the third time he threw the sword into the lake it came from. Bedivere was said to have been killed in the Roman Campaign.

All content from Kiddle encyclopedia articles (including the article images and facts) can be freely used under Attribution-ShareAlike license, unless stated otherwise. Cite this article:
Bedivere Facts for Kids. Kiddle Encyclopedia.