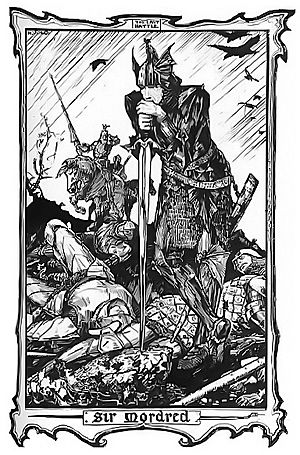 Mordred is a character from Arthurian legend. In some of the legends, he betrayed Arthur and killed him. He is said to be Arthur's son by Morgaine (also called Morgan or Morgana), his half-sister. Mordred was born at Caerlon. Mordred was also said to have been killed by Arthur after he stole Excalibur from him. He was killed while Arthur was fatally wounded.

All content from Kiddle encyclopedia articles (including the article images and facts) can be freely used under Attribution-ShareAlike license, unless stated otherwise. Cite this article:
Mordred Facts for Kids. Kiddle Encyclopedia.