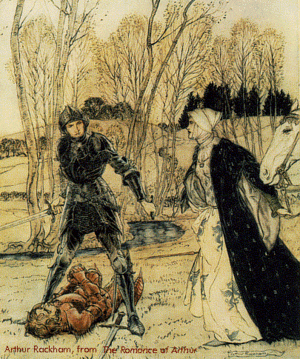 Gareth was one of the Knights of the Round Table in King Arthur's Court. In Sir Thomas Mallory's classic story, Le Morte D'Arthur ( French for "the death of Arthur"), Gareth is given the nickname of "Beaumains" by Sir Kay. After one year, Gareth revealed his identity as Sir Gawain's brother and went on a quest as a gift from Arthur.

He was named a knight by Sir Lancelot after a jousting and sword fighting challenge. He dies in the same story, which is the last in the series.

All content from Kiddle encyclopedia articles (including the article images and facts) can be freely used under Attribution-ShareAlike license, unless stated otherwise. Cite this article:
Gareth Facts for Kids. Kiddle Encyclopedia.