Round Table facts for kids 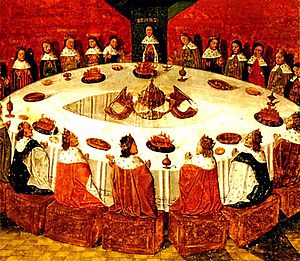 King Arthur presides at the Round Table. 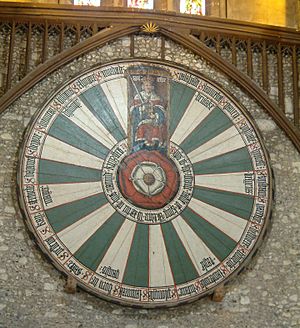 This, the Winchester Round Table, dates to about the time of Edward I 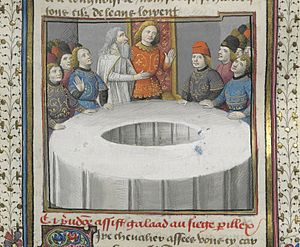 The shape of the table was very important. Most tables are rectangular, and have a place called the "head of the table". This is the narrow part at the top, where the leader usually sits. Because the table was round, it meant that the people who sat around it were all seen as equal.

Some legends also note a special chair at the Round Table, called the Siege Perilous, or 'Dangerous Chair'. Legend says that the seat could only be used by a knight who had a pure heart. A person with a pure heart was seen as someone who had committed no crimes or done any wrong. In the tale, anyone who sat in the chair but did not have a pure heart would die instantly. It was kept free by Merlin for the person who would one day find an object called the Holy Grail. This was a magical cup that was supposed to have been the one that Jesus drank out of during the Last Supper. In the story, this person was either Sir Galahad or Sir Perceval, depending on what version of the story is told.

All content from Kiddle encyclopedia articles (including the article images and facts) can be freely used under Attribution-ShareAlike license, unless stated otherwise. Cite this article:
Round Table Facts for Kids. Kiddle Encyclopedia.