Reese is a village in Tuscola and Saginaw counties in the U.S. state of Michigan. Located almost entirely in Tuscola County's Denmark Township, the village includes only a tiny portion of Blumfield Township in Saginaw County. The population was 1,454 at the 2010 census.

According to the United States Census Bureau, the village has a total area of 1.35 square miles (3.50 km2), all land.

The area of what is Reese today was first settled in 1865 when Mrs. Louisa Woodruff and her son built the first home (near the current intersection of Reese and Saginaw roads.) The Saginaw-Watrousville plank road was opened in 1871, which increased access to the community from Saginaw and the surrounding area. In 1873, the Detroit and Bay City railroads were built and Hudson B. Blackman plotted a tract of land adjacent to the original community (near the current intersection of Saginaw and Meridian streets)and named it Reese, in honor of G.W. Reese the railroad superintendent. (Hudson B. Blackman was probably the source of Hudson Street.)

William B. Stark was born in 1831 in New York and came to Denmark, Tuscola County, in 1865. Six brothers and one sister came to live with him in the following years. They lived in tents in the dense forest of the area in what is now Camp Street. In 1873, William’s brother, Joseph, came to the area and opened a hotel near the corner of Reese and Saginaw roads. He was the fourth family to move to the area, with the others being his brother, the Woodruffs, and the Rogerses.

In the fall of 1865, A.W. Gates, a stage proprietor from Saginaw, established a plank road from East Saginaw, through Reese, and into Watrousville. In 1871, Gates established a mail and stage route along the plank road. Gates kept his express and stage offices in Rogers’ hotel. The post office was also in Rogers’ hotel. The post office was named Gates in 1871 after the man responsible for its establishment. In the fall of 1871, Daniel Woodruff opened a grocery and provision store across the street from the hotel, and George Melatt and Archie Scott opened a blacksmith shop. In September 1872, Asenath M. Rogers, Roberts’ wife, surveyed and platted eleven acres and called it Gates. 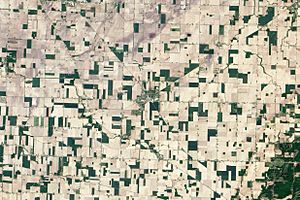 Acquired by the Advanced Land Imager (ALI) on NASA’s Earth Observing-1 (EO-1) satellite, the image shows the town on May 21, 2012.

In 1873, G. W. Reese brought the Detroit & Bay City Railroad through the town. Hudson B. Blackman then platted a tract of land adjoining Gates, and called it Reese, in honor of the railroad superintendent. The station, post office and town were then renamed after him. Thomas Haniford and Michael Doyle probably worked for that same railroad, and Eustius Gall, born in Switzerland, was an engineer. Blackman also donated the right–of–way and grounds on which the depot sat.

In 1875, Aseneth Rogers surveyed and platted an addition to the village of Gates. With the railroad station at the east end of town being called Reese, the post office of Gates at the west end eventually merged, the entire village and surrounding area becoming known as Reese. James N. Taylor, whom, according to the 1880 census was born in Virginia, served as postmaster from 1878 to at least 1883. In 1889, he and his family lost most of their possessions in a house fire.

The village grew rapidly and within five years had a population of more than 300. In 1877, it was described as the railroad and trading point for a large section of farming country. Along with transporting people to and from the area the railroad would also transport timber, limestone and produce to markets throughout Michigan. In the early 1900s, the railroad also was used by local farmers to ship hogs and cattle to Detroit. Stages were also running daily from Saginaw to Caro. The depot served both railroads, as two train order boards were present. (One on a mast for the NYC and one on the building for the PM). Reese Crossing was not an interlocking but it was protected by a target that was set by approaching train crews. The east-west route is that of the Pere Marquette, and the north-south route going by the grain elevator is the Michigan Central branch line between Denmark Jct. and Bay City. The target was set vertical for a Michigan Central movement on the Denmark Jct. Branch.

In 1946, the C&O Railway purchased the line. In 1985 the C&O combined with B&O to form CSX Transportation. In 1988, Huron and Eastern Railway purchased the rail line which is still in operation today. In 1993, Reese celebrated 120 years of rail service. Reese area farmers are one of the Huron & Eastern Railway's major shippers. Even today the farming success depends on efficient use of the rail system.

The first school meeting in the area was held in April 1866 and school was taught in a lumber shanty. There were 200 children of school age in the district. The original Reese School was built in 1880. The left side of the building was the original structure which was remodeled and increased in size in 1912 On April 25, 1913, a student set fire to the school and it burned to the ground. A new school was built in 1914 at a cost of $10,231. That structure remained, with renovations and additions, until it was torn down in 1962. it was replaced by the present middle school building which was erected from 1957-1966. In 1972, the gymnasium was refaced. At that time, the building housed both middle school and high school aged students. The present elementary school was built in 1957 and housed the lower grades. Total district enrollment was 1,308 students. The current Reese High School as built at a cost of $3,195,000 and opened for the 1976-77 school year housing grades 9-12. The middle school housed grades 6-8, with grades K-5 in the present elementary building. Total enrollment for the district was 1,358 students. The middle school closed at the end of the 2014-15 school year, with students moving into the high school building. RMS is currently for sale. There are also three parochial elementary schools that serve the district. In 1971, 44 teachers from the elementary and high school went on strike. After refusal to go back to work, the Reese Board of Education fired all 44. Reese 44 members were the first teachers in Michigan fired for demanding a fair contract by striking. This produced the phrase "Remember the Reese 44".

The area continues to be largely agricultural. Corn, soybeans, navy beans, and sugar beets are the major crops produced. There is very little dairy or other livestock.

There were 635 households, of which 27.4% had children under the age of 18 living with them, 50.9% were married couples living together, 11.3% had a female householder with no husband present, 3.6% had a male householder with no wife present, and 34.2% were non-families. 30.4% of all households were made up of individuals, and 14% had someone living alone who was 65 years of age or older. The average household size was 2.29 and the average family size was 2.84.

All content from Kiddle encyclopedia articles (including the article images and facts) can be freely used under Attribution-ShareAlike license, unless stated otherwise. Cite this article:
Reese, Michigan Facts for Kids. Kiddle Encyclopedia.