Caro is located northeast of Flint and east of Saginaw in Michigan's Thumb region.

Caro began as a logging camp on the Cass River established by Curtis Emerson in 1847.

Later Samuel P. Sherman, who purchased 63 acres (250,000 m2) in the north half of the northwest quarter of section 3 in Indianfields Township on September 8, 1852. Prior to this, only two land sales had been recorded, both for lumbering or speculative purposes. His son, William E. Sherman, had worked in the lumber industry nearby on the Cass River for some time prior to 1852 and William's favorable report persuaded his father to visit in 1851 and afterwards purchased several tracts of land in addition to his initial purchase.

In the 1856-57 session of the Michigan Legislature, construction of a road was authorized from Bridgeport in Saginaw County northeast to Forestville in Sanilac County, with a route that would pass through what is now Caro. Once the road was cleared, commercial interests began to locate here. Melvin Gibbs, who had been keeping a hotel in an old log house, in 1858 put up a new frame building, known as the Gibbs House. In 1859, William E. Sherman built another hotel, which he named the Centerville House, based on the location being near the center of the county. The name Centerville became associated with the developing community.

In 1865, Centerville was selected as the county seat. A post office named Tuscola Center was established on April 25, 1866. To address confusion caused by the differing names, community leaders met in 1868 and at the suggestion of William E Sherman selected the name Caro, based on a variant spelling of the Egyptian city of Cairo.

The city is served by the Caro Municipal Airport, located approximately two miles southwest of the city. Founded in 1930, the airport was significantly improved under Michigan Department of Transportation grants throughout the 1980s and 1990s, to add and lengthen the runway and taxi-ways, as well as a new administration building and additional hangar space.

There were 1,777 households of which 28.6% had children under the age of 18 living with them, 36.9% were married couples living together, 15.4% had a female householder with no husband present, 4.9% had a male householder with no wife present, and 42.9% were non-families. 36.3% of all households were made up of individuals and 14.5% had someone living alone who was 65 years of age or older. The average household size was 2.22 and the average family size was 2.88.

There were 1,738 households out of which 29.6% had children under the age of 18 living with them, 42.6% were married couples living together, 13.5% had a female householder with no husband present, and 40.0% were non-families. 35.1% of all households were made up of individuals and 16.3% had someone living alone who was 65 years of age or older. The average household size was 2.31 and the average family size was 2.95. 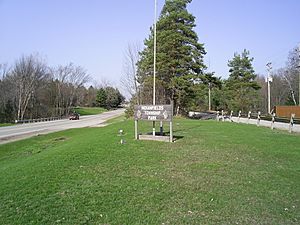 Caro is the home of a Pioneer Sugar Company facility. Local sugarbeet farmers retain joint ownership of the plant.

In 2003, Michigan Ethanol, a partner of Broin Companies, opened a corn ethanol production facility in southwest Caro. This plant is now owned by Poet Biorefining.

The Caro Center, a mental health facility operated by the state of Michigan, originally opened as a support center for individuals with epilepsy and operated as a self-supportive community, producing its own vegetables and maintaining livestock. Following, it converted to an institution for the developmentally disabled, and now operates as an inpatient psychiatric hospital for mentally ill adults.

The former Camp Tuscola, which was a state correctional facility until 2005, is now a residential re-entry program.

On July 23, 2007 Governor Jennifer Granholm announced Caro as a community chosen by the Michigan State Housing Development Authority (MSHDA) to take part in the Blueprints for Downtowns program. Caro will receive a comprehensive, market-driven strategy toward developing an action-oriented downtown that will result in economic growth, job creation and private investments.

Caro residents voted in favor of changing to the status of a city on November 3, 2009. Village President Tom Striffler was elected to the position of mayor. Elected to the city council were Mike Henry, Rick Lipan, Joe Greene, Charlotte Kish, Amanda Langmaid, and Richard Pouliot. The first meeting of the new city council was held on November 13.

This climatic region is typified by large seasonal temperature differences, with warm to hot (and often humid) summers and cold (sometimes severely cold) winters. According to the Köppen Climate Classification system, Caro has a humid continental climate, abbreviated "Dfb" on climate maps.

All content from Kiddle encyclopedia articles (including the article images and facts) can be freely used under Attribution-ShareAlike license, unless stated otherwise. Cite this article:
Caro, Michigan Facts for Kids. Kiddle Encyclopedia.